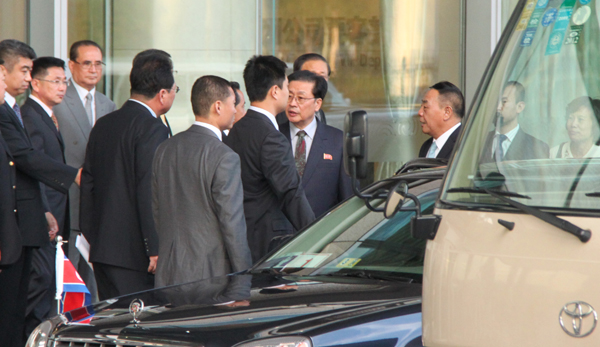 Jang is the first high-level official to make such a visit to its closest ally under the ruling of the new leader.

During the visit, analysts say that Jang could possibly explain recent efforts or any plans for an economic reform to its closest ally, but it’s still too early to say that North Korea will launch a Chinese-style reform yet.

The North’s state Korean Central News Agency reported Monday that Jang will attend “a meeting of the DPRK-China cooperation committee for the third joint development of Hwanggumpyong and Rason districts.”

Jang arrived at Beijing Capital International Airport from Pyongyang at around 6 p.m. on Monday by Air China’s CA 122 flight, with reporters waiting for him on the spot.

Jang was accompanied by some 20 or 30 high-ranking North Korean officials, such as: Kim Yong-il, a secretary of the ruling Workers’ Party’s foreign affairs; Ri Kwang-gun, the chairman of the joint venture investment committee; and Kim Hyung-jun, deputy foreign minister.

Including staff members, the delegation is reportedly composed of 50 people, which is similar in scale to those of former leaders. They left the airport by minibus and in black sedans.

During the six-day visit, the North Korean delegation will also tour the southern region of China and three northeastern provinces, sources said. On Friday, they will hold a high-level talk, where Chinese President Hu Jintao will meet with Jang. The delegation will return to Pyongyang on Saturday.

“Since the ruling of ex-leader Kim Jong-il, Jang has been in charge of directing the joint economic regions of China in an effort to attract foreign currencies to the stagnating economy of North Korea,” a South Korean government official said.

“Although the two countries launched a groundbreaking ceremony in 2011, Chinese companies have been lukewarm to developing the region due to poor infrastructure in the zones. Jang appears to have boosted the stalled investment of China with the visit.”

“However, considering Jang’s special status [as guardian of Kim Jong-un], he could possibly discuss other issues,” the official added.

Kim Yeon-soo, a professor at Korea National Defense University, told the Korea JoongAng Daily that Jang seems to be there in place of leader Kim.

“Jang’s visit is a de facto summit between North Korea and China,” Kim said. “While the term of Chinese President Hu Jintao is going to end soon, it’s not good timing for the new leader to make his debut at an international venue.”

In the midst of a deteriorating relationship with China, North Korea is desperate to restore diplomatic ties with its traditional ally, Kim said, through Jang’s visit.

“Jang would focus on seeking more aid from China and boosting mutual economic assistance with them,” Kim said. “Given that he also accompanied some foreign ministry officials, he could touch on improving relations with the United States.”

Yang Moo-jin, a professor of the University of North Korean Studies, said that the North is trying to earn endorsement for their economic reform plans from China.

“In order to carry out economic reform, North Korea definitely needs cooperation from China,” Yang said. “So Jang is going to explain the new leader’s reform plan to the Chinese government first before Kim makes an official visit to Beijing.”

When senior Chinese official Wang Jiarui had a bilateral meeting with Kim Jong-un in Pyongyang early this month, expectations were high that Kim would soon make a visit to China, given the previous cases.

“Previously, there are some cases that Wang’s visit to Pyongyang was followed by a visit of former leader Kim Jong-il’s visit to China,” another South Korean official told the JoongAng Ilbo.

Before Jang’s visit to Beijing, China’s state-run harbor construction company reached a deal with North Korea to develop three ports in a joint economic zone near the two countries’ border for the next half century.

The source said they met with North Korean officials and agreed on developing North Korea’s three ports in the zone located in the northeastern tip of the country for the next 50 years. Founded in 1873, the company is currently the largest harbor developer in China, with 1.5 trillion yuan ($235 billion) in assets.

The sources said that a state-guided consortium will lead the project for the North Korean ports, along with two other real estate developers.