In broad daylight, on the crowded Gangnam Boulevard, southern Seoul, a gun battle breaks out.

The involved parties begin an intense cat-and-mouse game between coffee shops and restaurants where Koreans spend their leisure hours. The chase spills down a flight of stairs into a subway station and through the doors of a train.

Fortunately, this isn’t happening in the real world.

They are scenes that appear in director Tony Gilroy’s film “The Bourne Legacy,” the fourth installment of the popular “Bourne” spy series, which pushed “The Dark Knight Rises” out of the first place slot at the weekend box office last week.

Seoul is gaining popularity as a filming location for international media producers.

A total of 97 international films, dramas and entertainment programs from the U.S., Japan, France and several Southeast Asian countries including Thailand and Malaysia have shot parts of scenes here since 2007, the Seoul Metropolitan Government said.

“Seoul is the best filming location,” director Gilroy said in an interview with Korean media. “We wanted a location unfamiliar to the audience, but with experienced staff that can assist our team.”

For “Black Dawn” (2012), a Japanese thriller, popular Japanese actor Watabe Atsuro and Korean star Kim Kang-woo shot scenes on Yeouido and on the Seogang Bridge in western Seoul and Jamsu Bridge in the southern part of the city.

The movie premiered in 235 movie theaters in Japan in June and earned $3.35 million in the first three weeks.

“Films produced in Seoul have drawn many moviegoers successfully in their home country,” said Baek Woon-seok, the director of the Cultural Industry Division from the Seoul Metropolitan Government.

“We believe that the recent Korean Wave certainly attracted many producers, as many fans in their countries are curious about Korea.”

The municipal government said that they support 25 percent of the movie production cost generated in Seoul, up to 100 million won ($88,500) a film. They also support a portion of airfare costs and accommodations for directors and staff when they come to Seoul to scout filming sites. 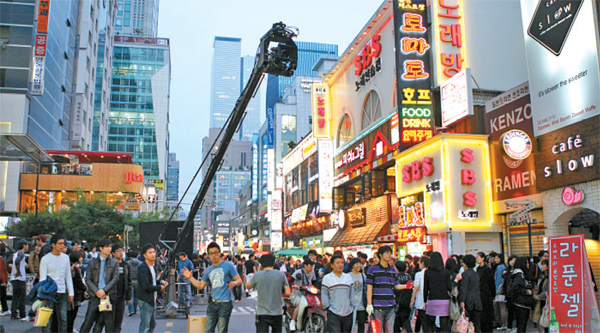 Scenes of director Tony Gilroy’s film “The Bourne Legacy,” the fourth installment of the popular “Bourne” spy series, are being shot in June 2011 in the Gangnam District, southern Seoul. Provided by Seoul Metropolitan Government


If “The Bourne Legacy” shows the present day Seoul, the Wachowski’s next sci-fi film, “Cloud Atlas,” which is based on David Mitchell’s novella of the same name, will show futuristic images of Seoul in the 22nd century.

The film features six intertwining storylines set in different times and places that become intricately woven together. Seoul is the background for a battle between servant clones and the humans that created them.

“Cloud Atlas” will be released in Korea in January next year.