August is a slow month for serious art enthusiasts. Many ongoing exhibitions are targeting students enjoying their brief summer vacations, and major events including the Gwangju and Busan Biennales are all scheduled to begin in September.

Yet there are still some shows luring in those who want a deeper understanding of contemporary Korean art. Here are three that focus on local artists who are neither too famous nor obscure and deserve more attention in the art scene. 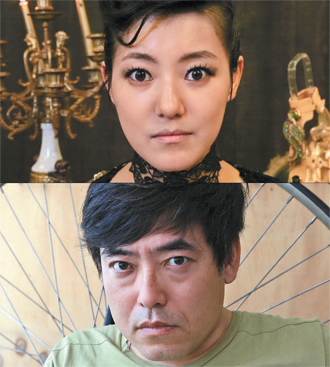 Choi KI-chang’s video installation “Eye Contact” is part of the “Artspectrum” exhibition at the Leeum.

The exhibition, which started in 2001 and has now reached its fourth edition, intends to be a showcase for diverse artists with potential, the museum said. This year’s show features eight artists.

Among the exhibits, Choi Ki-chang’s video installation “Eye Contact” (2012) is especially notable and will make viewers feel intense suspense. His work consists of two huge screens facing each other, each showing the image of a person leaning forward, trying not to blink.

When the person blinks, the screen converts to the image of another person. As the two screens face each other, viewers get the impression that the two in the screens are in the middle of a staring contest. But something else is actually taking place.

“Choi’s work highlights a world composed of irrational coincidences,” said Koo Kyung-hwa, curator of the exhibition. “By calling attention to this incomprehensible world, the artist heightens an awareness of our existence determined by chance.”

The exhibition also includes Bae Chan-hyo’s staged photography, in which he directs and appears as a heroine of Western fairy tales such as Cinderella or a female historical figure like Anne Boleyn. He appears in heavy makeup and antique costumes he has borrowed from museums in Britain, where he is based.

“The awkward dissonance between the persona he plays and his male physique makes us reconsider Western visual cultures, which we have accepted as a natural course,” Koo said.

The other artists participating in the exhibition are Kim A-young, Kim Ji-eun, Oak Jungho, Jang Bo-yun, Jun So-jung and Han Kyung-woo. All the artists happen to be in their 30s, the museum said. 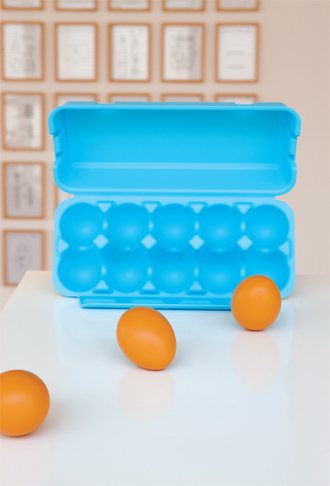 A work on display as part of the “Mass Production” project by Jackson Hong. Hong and two other artists are holding an exhibition at Atelier Hermes as the candidates of the luxury brand’s annual art award.

The French luxury brand Hermes is well known not only for its expensive bags, but also for its support of fine art in Seoul. Hermes Korea has been granting Missulsang, the Korean word which literally means an art award, every year since 2000.

It selects three candidates, supports them to create new works for a group exhibition and, after reviewing the show, selects one as the final winner who will get a 20 million won prize.

This year, Koo Dong-hee, Jackson Hong and Lee Mi-kyung have been nominated and are holding an exhibition at Atelier Hermes. The winner will be announced on Sept. 12.

Koo, 38, is presenting “Helter Skelter,” an installation project inspired by the Beatles song of the same title and by Charles Manson, a notorious American criminal.

Hong, 42, shows “Mass Production,” a group of familiar objects such as eggs and their cartons that he made 1.5 times as large as their original sizes. “The 1.5 times larger size is in between a real object’s size and the size of a monument,” Hong explained. “With recreations of such sizes, I talk about - rather than to commemorate - the past 20th-century periods of mass production.”

And 46-year-old Lee’s “Fence” provides some twists for viewers. The 1.8-meter-high (5.9-foot-high) white fences lure viewers to step on the nearby stools and look over the fence inside, but there is nothing. The fence and the overturning of the expectations themselves are her artwork. 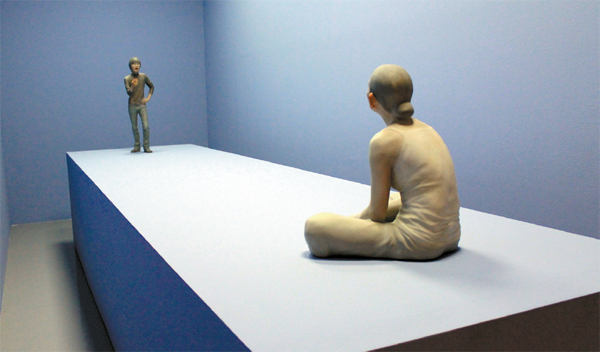 Choi Xooang’s sculptures, which depict forms of one-way communication that cause anxiety, are part of the “Playground” show at Arko Art Center, which focuses on anxiety in Korea. Provided by the gallery

The exhibition focuses on the theme of anxiety in Korea. “Though Korean society seems stable and peaceful from the outside, multiple signs of anxiety are starting to surface from the inside,” the museum said in a release.

The exhibition features works in various genres by nine artists. But their works share a common point - the direct or indirect expression of anxiety.