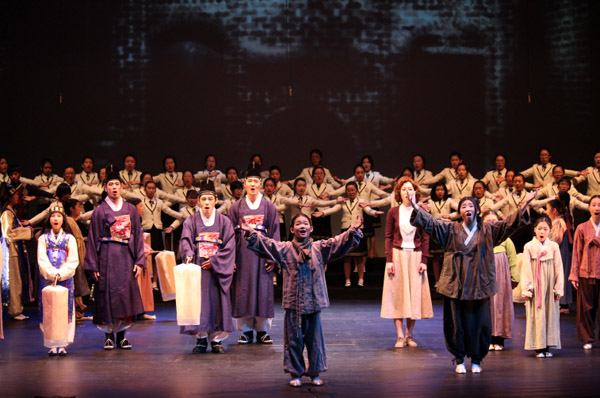 The Seoul Metropolitan Junior Chorus will perform reinterpretations of traditional instrumental pieces on Sunday at the Grand Theater of the Sejong Center for the Performing Arts in central Seoul. See MUSIC. Provided by the organizer

Saturday: The Hwaum Chamber Orchestra was established in 1996 and is known for its lively performances.

The orchestra is to perform its 37th concert at the Seoul Arts Center, and in addition to playing several of Shostakovich’s compositions, like “Two Pieces for String Octet” and the “Chamber Symphony”, the group will also perform Mozart’s “Serenade” and their own music such as the “Hwaum Project.”

Sunday: The Seoul Metropolitan Junior Chorus is taking on the theme of instruments and will perform reinterpretations of traditional pieces often found in children’s textbooks.

The list of songs includes “Chopsticks”, “Humoresque,” and musical pieces by legendary composers such as Mozart and Beethoven.

The concert will start at 5 p.m.

Sunday: Will the real Slim Shady please stand up? For the first time in Korea, he will. Eminem’s “Recovery Tour” makes its way to Seoul this summer after stops in the Americas and Europe.

Aug. 20 to 22: The Seoul Metropolitan Youth Orchestra will be performing a “Summer Classics” concert.

For three consecutive years, the concert has ranked number one, and for this year, a program that includes vocal music, art and dance will be performed as well.

The concerts will start at 7 p.m.

Aug. 22: The internationally acclaimed British jazz funk band Jamiroquai is coming to Korea as part of its “2012 Rock Dust Light Star Tour” in collaboration with Audi at Jamsil Indoor Stadium.

When Jamiroquai visited Korea for the first time, tickets sold out in five minutes. The group has sold more than 25 million albums and has been described as the world’s most stylish band.

Sept. 8: Following the success of shows in 2010 and 2011, Park Concert will present another elite lineup for this year’s installment. Japan’s Yuhki Kuramoto, Canada’s Steve Barakatt and Korea’s Yiruma have collaborated to present “Piano Paradiso,” and the audience will be able to listen to Kuramoto’s “Lake Louise” and “Romance”; Barakatt’s “Rainbow Bridge” and “The Whistler’s Song”; and Yiruma’s “When the Love Falls” featured in the megahit drama “Winter Sonata.”

Aug. 28 and 30; Sept. 1 and 2: Puccini’s classic opera “La Boheme” is coming to the outdoor stage of Yonsei University.

The work has become part of the standard Italian opera repertoire and is the fourth most frequently performed opera in the world.

To Sept. 4: Based on the 1973 French play by Jean Poiret, the Tony Award-winning play “La Cage aux Folles” comes to Korea.

To Oct. 21: The prominent musical “Hedwig and the Angry Inch” is back after its performance in 2005, and this time, it will be shown at the Sangsang Art Hall. The story centers around rock singer Hedwig, who after a failed sex reassignment surgery goes on an American tour.

The cast of this show includes Park Geon-hyeong and Oh Man-seok, who are well-known for their acting competency and very popular among female audiences.