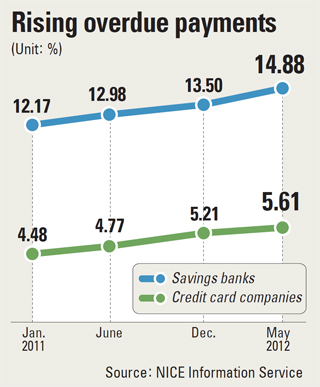 Alarm bells are sounding as the risk of insolvency in the nonbanking sector continues to grow.

Last year, a Songpa resident in southeastern Seoul borrowed 360 million won ($318,000) after putting up an apartment worth 1.1 billion won as collateral.

However, he already had a 600 million won bank loan. Although the borrower exceeded his loan-to-value ratio, also known as the LTV, he was still able to take out the second loan.

According to the Board of Audit and Inspection, similar cases involving breaches of the LTV regulations, where borrowers were able to load up with additional debt, accounted for 86 percent of the 2,286 mortgages approved last year by eight local savings banks.

But such risky lending policies have now led to insolvency on a mass scale. The overdue payment rate of loans at savings banks on average stands at 8.2 percent, far above the rate of 0.9 percent at commercial banks.

In a bid to clamp down on illegal extensions of debt, the Financial Supervisory Service (FSS) is now looking into the issue and collecting data and information from insurers and other nonbanking companies.

Of this total, the FSS decided to look into the 82 trillion won of mortgages, or 9 percent of the 911 trillion won taken out as household loans as of end of the first quarter.

There are already signs that mortgages in the nonbanking sector are piling up.

The LTV regulation for savings banks is much lenient than that applied at commercial banks, with borrowers able to get loans equivalent to up to 70 percent of the collateral value. In contrast, commercial banks put a cap of 50 percent. But many of these mortgages include secondary loans that exceed the LTV limit.

“At times like this, when the value of apartments is falling, additional loans that exceed the LTV limit tend to shoot up,” said an FSS official. “In such cases, the banks often end up trying to recover their principal by auctioning off the collateral assets. But if this happens, it is difficult for the nonbanking lenders to recover all of their loaned money, ramping up the risk of insolvency.”

As apartment values have been falling, many borrowers are finding that the real estate they used as collateral is worth less, while the interest on their loan merely widens the gap further.

The financial authorities see the situation in the nonbanking sector as getting dangerous, as some borrowers increased their debts to between 80 or 90 percent of the collateral value back when the real estate market was thriving by resorting to loopholes in the loan regulations.

The FSS is planning to expand its investigation into commercial real estate, including plants and stores.

“If the financial system were to collapse, it would start from the nonbanking sector, which attracts many customers with low credit ratings,” said Kim Jung-shik, the dean of Yonsei University’s department of commerce and economics. “Although it has not yet reached a critical level, we need a program to extend the period of repayment or otherwise adjust the debt load.”