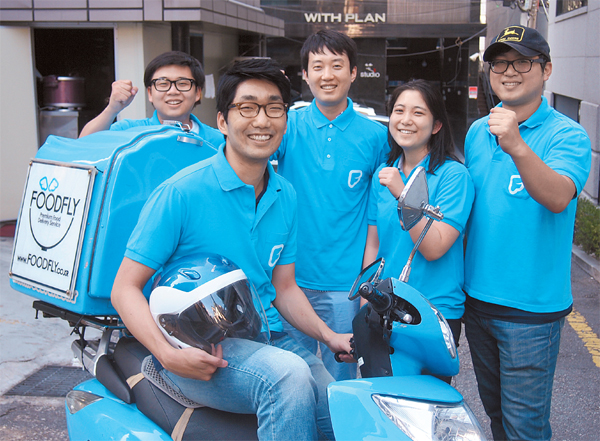 Lim Eun-seon, the founder and CEO of FoodFly, front center, sits on one of the company’s delivery bikes with his employees. The company picks up and delivers food from 160 restaurants. Provided by the company


Lim Eun-seon, the 28-year-old founder and CEO of FoodFly, has seen his food delivery business take off this year, with monthly revenue skyrocketing from 30 million won ($26,540) a month to 170 million won.

FoodFly picks up food from restaurants and delivers them to customers’ addresses anywhere in Seoul, adding a surcharge. It has signed contracts with 160 companies, including family restaurants such as Bennigans, Japanese eateries likes Sushi Hiroba and the popular Korean chain Bibigo.

Due to the limited size of the business, most of the restaurants are clustered in the affluent Gangnam District in southern Seoul.

What makes FoodFly different from other delivery services is that it is more like a one-stop service, with customers able to order a full range of food and beverage products from its official Web site.

It began operating last August with just six employees, but now has 30 people on the payroll.

Lim, who graduated from Pohang University of Science and Technology (Postech) with a degree in electronic engineering, said his first job at a foreign consulting firm helped him come up with the idea and ways of successfully managing the business.

At the time, the restaurant industry was growing rapidly, with numerous Web sites offering discounted menus to attract customers but few cottoning on the benefits of integrating a delivery service.

Lim wanted to bring the restaurant market, which is worth roughly 50 trillion won a year, online in a way that would maximize customer convenience - hence the one-stop service idea.

He approached Shin Sung-yoon, one of the four founding members of the popular social commerce site Ticket Monster, for financing and received 200 million won.

“We struggled at first because our company name wasn’t well known,” Lim said.

To increase brand recognition, he narrowed the target region to Gangnam and used a strategy of approaching not only restaurants that would later become business partners, but also individual customers.

He made flyers to promote FoodFly and pasted them on the doors of apartment complexes near his office.

He then went door-to-door to local restaurants to drum up business while also testing the quality of the food before signing any contracts. 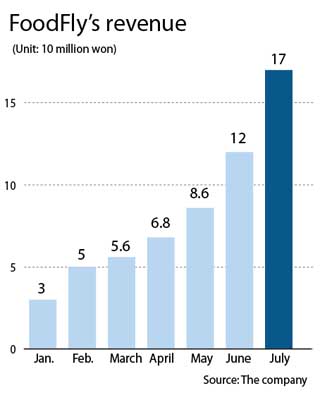 “In such cases where we thought the food tasted great, we met with owners and convinced them of the merits of opening a de facto second store online at no extra cost,” Lim said.

However it was not all smooth sailing, with a number of big-name restaurants knocking him back as they thought that integrating a delivery service could hurt their image. Others were simply skeptical of a delivery service they had never heard of, and unsure of the quality and reliability of its service.

But this low credibility rating soon changed as the company received a 700 million won investment from Stonebridge Capital in February. A contract with Bennigans in April also helped shore up confidence in FoodFly.

In January, it had contracts with just 40 restaurants, a number it has now quadrupled, including eateries in the trendiest parts of town, Sinsa-dong and Apgujeong, in southern Seoul.

FoodFly charges customers a flat rate of 4,800 won as well as secondary fee calculated by distance. Deliveries within Gangnam cost under 8,000 won, with an extra 1,000 won added for other neighborhoods. It charges the same to deliver one burger as it does for a family meal.

“If I were to work for a company, I would just be a cog in the machine. But having my own business lets me come up with my own ideas and see these bear fruit, which is much more satisfying,” Lim said.

He said he plans to expand his business throughout Seoul and is confident this niche market will prove highly lucrative.