President Lee Myung-bak, center left, and his wife Kim Yoon-ok, center right, with leaders of government branches give three cheers during a ceremony marking Liberation Day, the anniversary of the end of Japan’s colonial rule over Korea from 1910-45, in Seoul yesterday. [YONHAP]


President Lee Myung-bak yesterday took yet another step to pressure Japan to assume responsibility for its wartime sexual enslavement of Korean women, calling it “a breach of women’s rights” and “a violation of universal human rights and historic justice” that goes beyond the bilateral ties.

Korea celebrated the 67th anniversary of its emancipation from Japan’s colonial rule yesterday, and Lee gave a speech, titled “Creating the future with shared growth toward a greater Republic of Korea,” at the Liberation Day commemoration event.

In the speech, Lee issued a short, yet stronger message toward the Japanese government to redress the long-standing grievances over the wartime crimes against Korean women, defining the issue as one that deserves international attention.

“Japan is a close neighbor, a friend that shares basic values and an important partner that we should work with to open the future,” Lee said.

“However, we have to point out that chain links tangled in the history of Korea-Japan relations are hampering the common march toward a better tomorrow in the Northeast Asian region, as well as bilateral ties.”

“Particularly, the issue involving mobilization of ‘comfort women’ by the imperial Japanese military goes beyond relations between Korea and Japan,” Lee said.

“It was a breach of women’s rights committed during wartime as well as a violation of universal human rights and historic justice. We urge Japan to take responsible measures in this regard.”

It was the first time that Lee addressed the comfort women issue in the Liberation Day speech.

In his March 1st Independence Movement Day speech this year, Lee implored Japan to resolve the issue, warning that time is running out for Tokyo to settle what Seoul sees as “an important humanitarian task.” 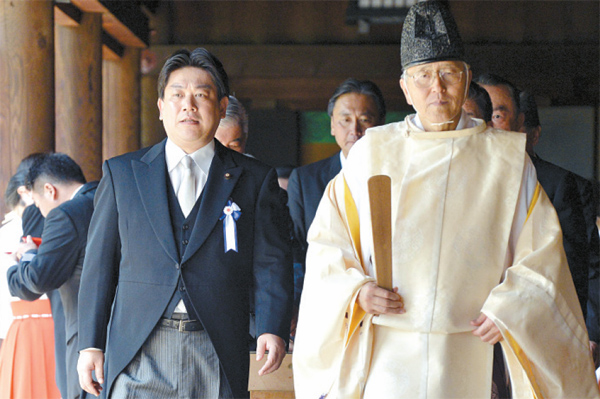 Japan’s Land, Infrastructure, Transport and Tourism Minister Yuichiro Hata, left, and other lawmakers are led by a Shinto priest after offering prayers to war dead at the Yasukuni Shrine in Tokyo yesterday on the 67th anniversary of Japan’s surrender in World War II. [YONHAP]


Since his December summit with then-Japanese Prime Minister Yoshihiko Noda, Lee has steadily pressured Japan to confront its colonial past and compensate the former sex slaves. Tokyo, however, insisted that all issues associated with its 1910-45 colonial rule of Korea, including the comfort women issue, were already settled in 1965 with a reparation package.

Jin Matsubara, the president of the National Public Safety Commission and minister for the abduction issue, and Yuichiro Hata, minister of land, infrastructure, transport and tourism, made separate visits to the Yasukuni Shrine that honors 2.5 million Japanese war, dead including 14 Class A criminals from World War II.

Since the centrist-left Democratic Party took power in 2009, Japanese government ministers have stopped paying visits to the shrine on the sensitive anniversary of Japan’s World War II surrender, as many of its Asian neighbors celebrated their emancipations.

While leaders from the ruling Democratic Party stayed away from the controversial shrine since the party took power in 2009, Junichiro Koizumi, former prime minister and leader of the conservative Liberal Democratic Party, had an annual visit during his 2001-6 tenure.

Seoul has already warned Tokyo on Tuesday to refrain from making the visits, but no new statement was issued yesterday. The Korean government appeared to treat the two cabinet ministers’ visits as their individual moves.

“We still think it was inappropriate for them to pay respects at the shrine,” an official from the Ministry of Foreign Affairs and Trade said. “It is desirable for Japan to face the truth of history.”

Another official said it is extremely regretful that politicians visited the Yasukuni Shrine, calling it “irresponsible action that fails to understand the emotions of the countries and the people who suffered during Japan’s imperial past.”

The Blue House said yesterday the president was repeating a clear message to Japan to assume responsibility over the wartime sexual enslavement and Japan knows what Korea wants. Choe Geum-nak, senior presidential secretary for public affairs, said Lee told Japan the specifics of Korea’s demand during his December summit with Noda. “And Japan precisely knows it,” he added.

While Lee reiterated his demand to Japan to redress the comfort women issue, he did not talk about other sensitive issues between the two countries, including Dokdo. Lee visited Korea’s easternmost islets Friday on a symbolic trip to refute Japan’s renewed territorial claim.

“The president already took action [on Dokdo],” Choe said. “And it was not necessary to talk about it in the speech.”

Signs were evident that the relations between Korea and Tokyo were hitting rock bottom. After Lee made an unprecedented presidential trip to the Dokdo islets on Friday and demanded an apology from the Japanese emperor on Tuesday, Japan did not hide its furious emotions.

According to the Mainichi Shimbun, a Japanese foreign affairs official called Lee’s remarks “unimaginable.” He said the aftermath will go on for years and bilateral relations won’t be restored easily even if Korea has a new administration in February.

The Korean political arena was divided on how to receive Lee’s latest series of moves against Japan. While the ruling party supported the president for expressing his frustration toward Japan’s lukewarm attitude to confront its colonial past, the opposition party condemned him for playing a political game to boost popularity at the end of his term.

The ruling Saenuri Party yesterday said it was appropriate for Lee to criticize Japan’s lukewarm attitude in addressing the comfort women issue in the Liberation Day speech, promising bipartisan efforts to resolve the historical grievances over the wartime crimes.

The liberal opposition Democratic United Party, however, reacted critically to Lee’s speech. DUP spokesman Park Yong-jin said Lee’s demand for Japan’s responsible measures was appropriate, but “The people have grown skeptical as to whether the Lee administration has a strategic road map toward Japan or not.”

“Diplomacy needs to have principles and flexibility at the same time,” Park said. “The public, however, grows increasingly uneasy about Lee’s amateurish approach as the government vacillated between soft and hardline stances.”

Some officials in the Foreign Ministry in Seoul also showed concerns about the increasingly aggressive diplomatic approach toward Japan.

“Diplomacy with Japan and China has become incredibly important,” a senior official told the JoongAng Ilbo. “But key policy making posts in the Blue House and the Foreign Ministry are dominated by experts in U.S. affairs. It is important to reinforce the expertise of the decision makers in order to help the president listen to various voices and make a balanced judgment.”