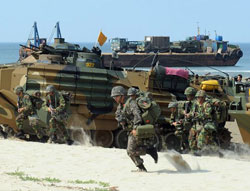 While anger and dissent are mounting in Japan over the South Korean president’s recent visit to Dokdo, Korean Marines will stage a landing exercise on the easternmost island.

“Early next month, the Marines will join a joint military drill with the Army, Air Force and Coast Guard for defending the Dokdo islets,” a high-ranking South Korean government official told the JoongAng Ilbo on Tuesday.

“About 100 soldiers from a Marine reconnaissance squadron will conduct a landing drill on Dokdo using a helicopter.”

The official said that the squadron is made up of elite troops in South Korea that would infiltrate enemy territory on the front line of a battlefield and advance an attack, eliminating obstacles and barriers.

During this exercise, the Marines will ride on two CH-47 helicopters and move from Pohang, a harbor city in North Gyeongsang, to Dokdo. Although the Marines have traveled close to the far eastern island before by Navy ship and have conducted a landing drill on their own, it is unusual for them to join the annual joint defense drill with other forces.

“It’s part of training for Marines to learn the process of an advance from Pohang to Dokdo in the event of war,” a high-ranking military official said. “The squadron is planning to stay on Dokdo for about 10 minutes during this drill.”

However, the official added that the Marines will prolong their reconnaissance exercise to determine the geographical features of the islets. Along with the Marines, a 3,200-ton destroyer, a 1,800-ton frigate, a submarine, an F-15K air fighter, a P-3C maritime patrol aircraft and a few Coast Guard patrol ships will take part in the large-scale exercise.

“We won’t open the scene of the exercise to the public,” said an official of the Joint Chiefs of Staff of the Army. “As the purpose of the drill is to attack ships illegally approaching our own territory, Dokdo, our relationship with Japan is not something for us to consider in planning the drill.”

The Defense Acquisition Program Administration, a state-run military procurement agency, submitted a report to the National Assembly last week that South Korea should reinforce its naval forces, which are relatively weaker than that of Japan. The report, titled “Solution to Build Up Maritime Forces of South Korea in Response to Reinforced Naval Forces of China and Japan,” said that Korea should create a “strategic maneuver fleet” as a task force to deal with a potential military threat from North Korea and quickly respond to any territorial battles near Dokdo or Ieodo.