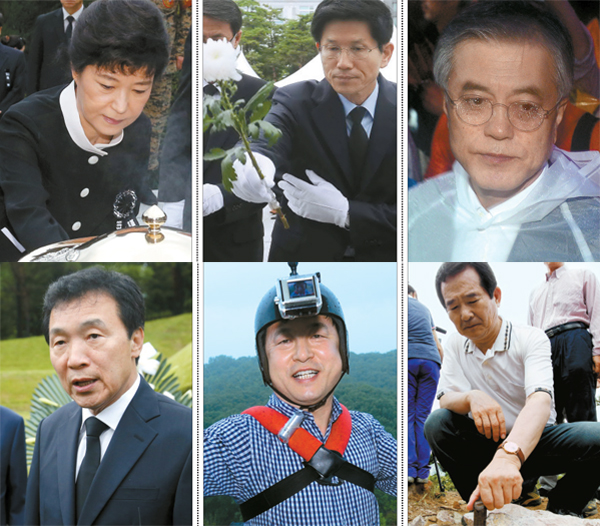 Clockwise from top left : Park Geun-hye, presidential front-runner of the ruling Saenuri Party, places an incense offering at the tomb of her late mother Yook Young-soo at the National Cemetery in southern Seoul. [YONHAP]

Kim Moon-soo, Gyeonggi governor and presidential contender of the ruling Saenuri Party, pays respects at the Memorial Tower for those lost in war at Ingye Art Park in Suwon, Gyeonggi. [YONHAP]

Sohn Hak-kyu, presidential contender and former DUP chairman, pays tribute at the tomb of Kim Koo, an independence fighter against the colonial rule of Japan, in central Seoul. [YONHAP]

Kim Du-kwan, a DUP presidential candidate, poses before bungee jumping in Bundang, Gyeonggi, which he had promised he would do if Korea won the football match against Japan. [YONHAP]

Chung Sye-kyun, a presidential contender for the DUP, works to remove a stake that imperial Japan planted to oppress the spirit of Koreans at Mount Okmae in Haenam, South Jeolla. [YONHAP]