Flooding in part of Seoul, more rain on its way

Flooding in part of Seoul, more rain on its way 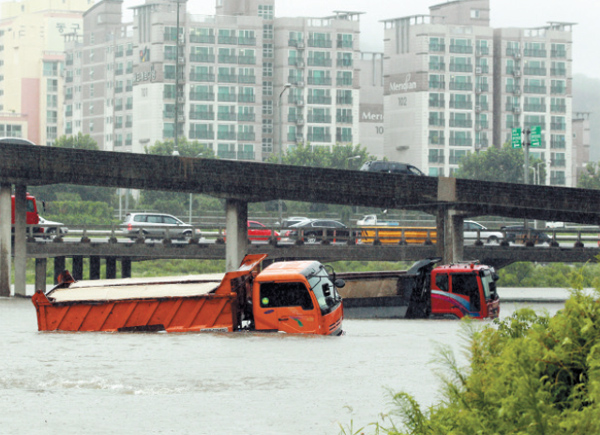 Flood waters strand two dump trucks on a road near Jungnang Stream in northern Seoul yesterday as an average of 148.5 millimeters (5.8 inches) of rain hit the capital as of 3 p.m. Some areas of southern Seoul saw more than 50 millimeters of rain per hour.[YONHAP]


Heavy rain soaked the nation on Liberation Day yesterday. Some parts in Seoul saw 50 millimeters (two inches) of rain per hour during the day .

Some regions in northern Gyeonggi saw their rain gauges collect more than 300 millimeters of precipitation.

The torrential downpour in the capital led the Korea Meteorological Administration to upgrade a rainfall advisory to a warning at 12:40 p.m. yesterday, which was in place for about two hours and later lifted at 3 p.m.

The warning is issued when the state-run weather agency anticipates more than 110 millimeters of rain to fall within six hours.

The expectation of 180 millimeters of rain within 12 hours also prompts the agency to issue a warning.

Southern Seoul was once again inundated, harkening back to the floods from the past two summers and reminding residents in southern Seoul of the Mount Umyeon landslide that killed 18 in July last year.

The intersection above Gangnam Station was flooded up to pedestrians’ knees, while areas near Yeoksam and Sadang stations in southern Seoul also saw flooding.

Citizens posted photos of the streets of an affluent area deluged again this year on Twitter.

The Seoul Metropolitan Government reacted to the downpour with a number of preventive measures, including banning citizens from entering pedestrian walkways along the Cheonggye Stream in central Seoul and blocked roads linking Cheongdam Bridge and Jamsil Bridge.

Operation of railroad lines connecting Dongducheon Station and Jeongok Station were halted for 90 minutes due to the heavy rain and resumed service around 1:20 p.m. yesterday.

The weather agency expected the storm front to move to the southern regions, bringing more than 30 millimeters of rain per hour to the northern parts of North Jeolla today.

Concerns grew yesterday as the weather administration expected the heavy rain to continue into today, causing up to 200 millimeter of rain in the central regions.

The weather agency forecast another rainstorm to hit the central regions as well as Seoul over the weekend.