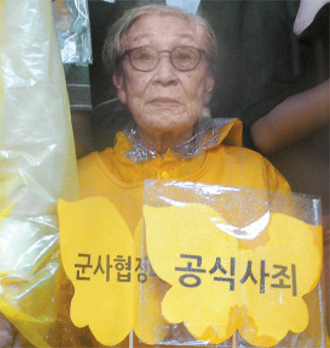 A former comfort woman holds up a sign stating “formally apologize” at a Wednesday rally near the Japanese Embassy in Seoul, yesterday. [NEWSIS]

On the 67th Liberation Day yesterday at Cheonggye Plaza, central Seoul, gut, or the traditional rite of shamanism, was performed to ease the victimized souls of “comfort women,” a euphemism that refers to women forced to provide sexual service to Japanese soldiers during World War II.

Despite heavy rain, hundreds of participants, including living comfort women in addition to civic groups, education circles and politicians, including Moon Jae-in, the presidential front-runner of the liberal opposition Democratic United Party, remembered the victims. These rallies and commemorative events were held nationwide throughout the day.

Earlier in the afternoon, the Korean Council for the Women Drafted for Military Sexual Slavery by Japan staged a rally across the street from the Japanese Embassy in Junghak-dong, central Seoul. The rally is being held regularly every Wednesday to demand the Japanese government apologize for comfort women and provide appropriate compensation to victims. It marked its 1,035th rally yesterday.

The Seoul Metropolitan Council yesterday proposed an ordinance to provide government subsidies to Korean women who were forcibly drafted as working slaves by Japanese during the World War II. If the ordinance is established, selected women will receive 300,000 won ($265) of monthly supplementary living allowance from the municipal government.

The ordinance was sponsored by 32 members of the city council including lawmakers Lee Gang-moo and Kim In-ho from the Democratic United Party. Apart from the sex slaves, about 50,000 to 70,000 Korean single women aged between 12 and 40 were drafted as working slaves to produce munitions in August 1943.

The Japanese government at the time attracted Korean women by telling them that they could get a decent job at Japanese corporations such as Mitsubishi Heavy Industries, but never paid their wages once they arrived at corporation factories in Korea, Japan and China. About 400 Korean women worked for Mitsubishi, according to the city government.

The city council said people living in Seoul for more than a year and identified as working slaves by the Commission on Verification and Support for the Victims of Forced Mobilization under Japanese Colonialism in Korea, a comfort women support agency under the Prime Minister’s Office, are eligible to receive the allowance.

They will also receive 200,000 won in monthly medical expense coverage and 1 million won for funeral service expenses will be given to the victim’s family if a victim passes away.

The city council said 52 confirmed victims will receive the subsidy once the ordinance is enacted in January next year.