Tourists report more cases of being robbed in Europe

Tourists report more cases of being robbed in Europe 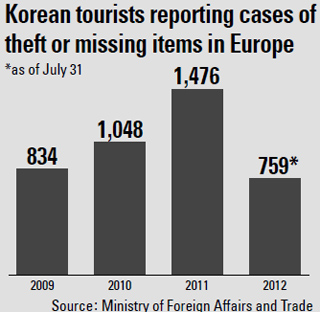 As a 22-year-old university student surnamed Kim was walking down the sidewalk in Barcelona, Spain, a man approached him and started shooting him in the face with a water gun.

Kim was caught off guard, but then he tried to defend himself by covering his face with one hand and grabbing the water gun with the other.

Just then, another man appeared and snatched Kim’s bag with his traveling money and ran away.

When Kim ran to the local police station to report the crime, he said he met three other Korean university students there who experienced a similar situation.

They said five men suddenly appeared and robbed them of their bags.

“I have heard about the danger of pickpockets and getting robbed when traveling Europe,” Kim told the JoongAng Ilbo. “But I never imagined that it could happen in the daytime, on a crowded street.”

The number of victims reporting being robbed while traveling overseas is increasing.

The Ministry of Foreign Affairs and Trade said that the number of cases reported to Korean diplomatic offices overseas last year was 1,476, up from 834 in 2009.

The ministry said that 759 cases had already been reported as of July this year.

“It really is a rapid increase,” a spokesman for the ministry said. “We judge that the recent bad economic condition has influenced theft and robbery rates in European countries such as Spain and Greece.”

“There is a close correlation between economic conditions and crime rate,” said Gwak Dae-gyeong, a professor of the Dongguk University department of police administration told the JoongAng Ilbo.

“People who barely eke out a living are engaging in such crimes more aggressively as their livelihoods are getting worse every day. When Korea was in the middle of the IMF crisis in the late 1990s, some people stole manhole covers from streets.”

There are no clear countermeasures to protect tourists from such crime.

Korean diplomatic offices aren’t able to handle it due to manpower shortage, and travel insurance policies being offered by domestic tour agencies aren’t good enough to cover the losses.

A 43-year-old man surnamed Lee, who traveled to Rome last summer, put his passport, a digital camera and wallet in his bag and put them inside of a car, but the window was broken and the bag was gone when he returned to the car. He immediately called the Korean consulate and asked officials to report the crime to the Italian police, but the only answer he got from the consulate was “We don’t have a large enough staff to handle that.”

He expected compensation from the travel insurance he purchased before he went to Italy, but he only received 200,000 won ($176). “I wasn’t protected by the consulate and the poor insurance policy was just useless,” Lee said.

In Korea, travel insurance policies generally guarantee compensation of up to 100 million won for injury cases, but only offer 200,000 won for theft.

“The insurance companies should provide rational programs for theft cases because the number of victims is increasing,” said Lee Ju-hong, a spokesman for the Green Consumer Network.