Movies at the palace: Sensible or sacrilege?

Movies at the palace: Sensible or sacrilege?

A recent outdoor screening of “I Am a King” at Deoksu Palace has stirred debate over the proper use of Korea’s historic landmarks.Provided by Lotte Entertainment


It was an unusual outdoor cinema event: a giant inflatable screen juxtaposed against the beautiful curves of the roof tiles of a grand palace. About 500 invited guests take their seats to watch the historical comedy “I Am a King” at the palace grounds at Hamnyeongjeon of Deoksu Palace, a sleeping quarter where Joseon King Gojong died suddenly of unknown causes in 1919.

The outdoor screening on Monday is the latest in a series of film distributors’ efforts to attract more attention by utilizing unique, unexpected public places, a movement seen by supporters as a way to increase public use and knowledge of landmarks and by critics as commercial exploitation of Korea’s heritage.

“I Am a King” earned substantial media coverage prior to the event as the first film screened at the historic landmark.

“The movie event is meaningful because ‘I Am a King’ is set in the Joseon Dynasty,” said Lotte Entertainment, distributor of the comedy drama, in a press release. “We will invite families of independence war fighters to mark Liberation Day on Aug. 15.”

The distributor paid an unspecified fee to the government for use of the property and there was no charge for those who attended.

Having been treated to a special screening, invited guests appear to enjoy the unconventional movie-watching, soaking up the warmth of a Seoul summer evening.

“It was a wonderful experience. The movie setting was matched with the place where I am,” said Kim Jin-young, 26. “The night sky stretched over my head and I could feel the gentle summer breeze as the movie went on. It was so amazing.”

Critics, however, question whether the use is compatible with national landmarks.

“The Cultural Heritage Administration is seeking to increase recreational access of cultural heritage. But the commercial sector is explicitly taking advantage of the move,” said Choi Ho-jin, manager of the National Trust Cultural Heritage Fund, Korea.

“Still, there is no committee or guideline to decide whether an outside project is appropriate to be carried out in the public domain. Even if the government body sets up rules and a committee, the movie contents are always subject to change,” said Choi. 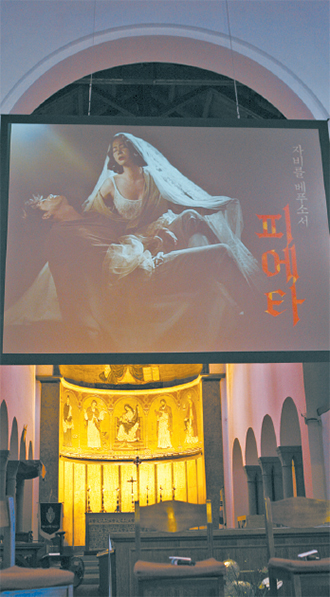 Kim Ki-duk’s movie “Pieta” was introduced in the sanctuary of the venerable Seoul Anglican Cathedral. The event raised eyebrows because the movie mixes religious and sexual themes.Provided by Hohoho Beach

An official at Deoksu Palace said the film screening was approved at a meeting of officials, but it intends to refer the matter to a division responsible for managing royal palaces in the Cultural Heritage Administration.

Others view the expanding use of landmarks as a good thing, saying it will help people feel more connected to historic sites.

“I think the event is sort of a win-win for both movie industry and the general public. Film distributors can promote their movies while keeping the citizens close to the national landmark,” said Lee Jae-hak, head of Rediscovery of Korea, a heritage preservation organization.

The royal palace is not the only place where the issue comes up. Seoul Anglican Cathedral was in the media spotlight over a production press conference for Kim Ki-duk’s upcoming movie “Pieta” that was held there last month, the first such event in the 110-year history of the church.

Kim’s R-rated movie is the story of a brutal robber who works for loan sharks. The film depicts a mysterious relationship between the man and a middle-aged woman who claims that she is his mother, mixing Christian symbolism and highly sexual contents.

The location seemed to be linked with what the director seeks to deliver through the film.

“Religion is so closely connected to humans and I think if anything, this element of existence should be expressed through love,” Kim said during the press conference. “I think sex, in a way, is a prayer of sorts, so instead of dichotomizing the two [sexuality and religion], I think of the elements more as a singular chunk of our lives.”

Priest Yoo Si-kyung, who allowed the movie event, stood behind his decision while acknowledging that it was difficult at times. “Other clergy and some believers voiced concern about the movie conference,” he said. “But I don’t think the religious building should be available only for the faithful.”