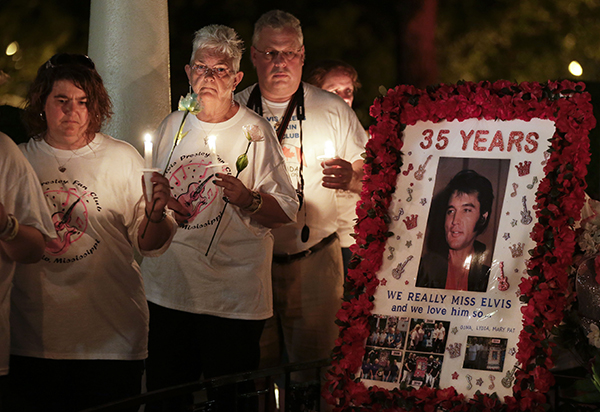 MEMPHIS - Elvis Presley fans hoisted colorful umbrellas against a hot sun and massed in folding chairs outside Graceland on Wednesday, awaiting a candlelight vigil marking the 35th anniversary of the death of the rock ’n’ roll icon.

Elvis admirers flocked by the thousands to Memphis from as far off away as England and Japan, many waiting hours to enter the mansion where Presley is buried on the grounds.

Presley died on Aug. 16, 1977, of a heart attack after suffering from prescription drug abuse.

The vigil marks the high point of Elvis Week, the annual celebration of Presley’s life and career. Organizers said they expect 75,000 people to attend Elvis Week, with many taking part in the vigil that began Wednesday evening and lasted until yesterday evening.

This year also brings another highlight with a 35th-anniversary tribute concert planned at an area arena Thursday night. His ex-wife Priscilla Presley and daughter Lisa Marie Presley were expected to attend the concert featuring live musicians playing along with videotaped footage of Elvis singing.

On Wednesday afternoon, Cheryl Skogen and friend Susan Struss held up black umbrellas with polka dots near the front of the line as they waited to enter Graceland’s grounds.

As longtime Elvis fans and neighbors in Los Angeles, they said they decided to come to Elvis Week without their husbands.

They got up well before dawn Wednesday for a prime spot in the line. AP