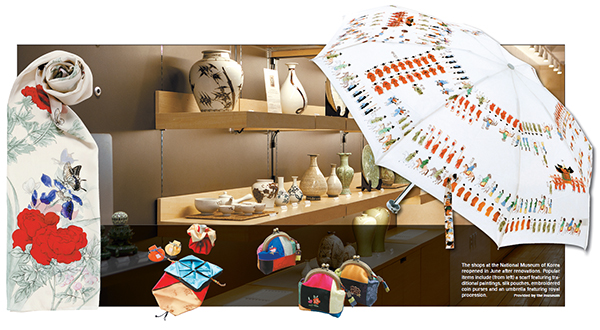 The shops at the National Museum of Korea reopened in June after renovations. Popular items include (from left) a scarf featuring traditional paintings, silk pouches, embroidered coin purses and an umbrella featuring royal procession. Provided by the museum


Traditionally, museum shops did not generate high expectations. They were little more than areas to walk through on the way out. Museumgoers might pause for a moment, but rarely were the items on display irresistible.

After all, a museum shop wasn’t Harrods.

But the Museum of Modern Art in New York City changed all that.

From its beginning in 1939 as little more than an afterthought off the museum’s lobby, the MoMA Design Store has grown to include three brick-and-mortar outlets - two in New York and one in Tokyo - and an online shop that targets the world.

MoMA Design Store was named “Top Museum Store” in Zagat’s New York City shopping guide for two years straight. In order for a product to be sold at the store, it has to be approved by professional design curators who examine a wide spectrum of factors, such as function, design and humor.

In recent decades, museum shops evolved and started to assume more roles. They have unique colors, styles and concepts. In the case of some prestigious museums in the United States, Europe and Japan, you can get a sense of the museum from the museum shop.

In that regard, Korea is late to the party.

With the reopenings, these spaces have become something more than just annexes. Rather, they are spaces that are as important and worth visiting as exhibition halls.

They are also vying to be the “face” of the museums by becoming a crucial tool for promoting and enhancing the identity of the institutions.

The shop at the National Museum of Contemporary Art, Korea, seeks to be more like a gallery. Featured items include (counterclockwise from top) chair by furniture designer Yi Hyung-woo, chairs by Kim Jeong-seob, eco-friendly bags with an Uul logo and a bag created in collaboration with fashion designer Moon Young-hee. Provided by the museum

With the recent renovation, the shop at the National Museum of Korea has gotten brighter, larger and more modern.

Visitors can now enjoy the items with stories of their own in a spacious space in much the same way they would appreciate antiquities or works of art on display in the exhibition rooms.

In 2005, when it moved to Yongsan, central Seoul, the museum created a product development team within its organization.

Each year, the team has rolled out about some 170 shop items, and today they offer about 1,400 fashion, housewares and stationery items, among others. While designers are free to explore all kinds of ideas, all items must be 100 percent “Made in Korea.”

The product development team has made its mission to revitalize the Korean crafts culture, enhancing the lineup of items from emerging craft artisans. In particular, accessories and jewelry, which can be elegant and sophisticated works of art in themselves, have become steady sellers among women in their 40s who represent the biggest share of museum visitors.

“In the past, most items took relics as motifs,” says Wang So-yeong, one of the publicists for the museum. “But today, we are collaborating more with young, emerging artists to increase the lineup of crafts that have reinvented tradition in a creative and classy way.”

If you look at some of the best-selling items at National Museum of Korea shop, oftentimes they are associated with successful special exhibitions.

For instance, many of the items inspired by uigwe are selling very well. Uigwe, the books that detail protocols of royal ceremonies and rites of the Joseon Dynasty (1392-1910), were returned from France in April last year, and the museum held a special exhibition. The exhibit inspired such items as men’s ties, figurines and stationery.

“Through these items that people use on a daily basis, they can subconsciously support their history and cultural roots,” says Kim Ji-won, director of product development team at the museum. “That is the main goal of our team.”

Exhibit-inspired items also help expand and extend awareness of the museum and its activities. For instance, the lacquerware inlaid with mother-of-pearl items that became available after a 2006 exhibition of the traditional Korean craft is still popular among Japanese visitors, according to the museum. And items from a 2008 exhibition on Korean art inspired by autumn remain steady sellers among foreign visitors.

In fact, museum officials view the museum shop as useful in marketing Korean culture abroad. For that reason, one of the team’s key initiatives through 2012 is to use museum shop products to tap foreign markets.

For instance, the items developed for “The Civilization of Turkey: Emperors in Istanbul” exhibit currently under way at the museum have received a good response from officials in Turkey and the development team is exploring ways to export them.

At a Korean exhibition scheduled for next year at the Asian Art Museum of San Francisco, the team hopes to decorate the shop of that museum “in a Korean style” and display products they have developed.

“Korea is promoting itself through dramas and food, but not so much with its traditional culture,” says Kim Sun-deuk, president of Cultural Foundation of the National Museum of Korea, which manages the shop.

“Through enhanced design and more exposure at museums overseas, we hope our museum shop products can be the new Hallyu business.”

Meanwhile, the National Museum of Contemporary Art, Korea, in Gwacheon, Gyeonggi, is more focused on drawing a connection with its Seoul branch named Uul and slated to open next year just east of Gyeongbok Palace in the Gwanghwamun area.

Uul, which is a shorter version of Uri (meaning us in Korean) and also the second syllable of Seoul, is aimed to convey what the museum wishes to be - “a museum that is close to us always,” according to museum officials.

The shop at the National Museum of Contemporary Art, Korea, is created to give a “vintage modern” aura and is partially made of materials taken from the old Defense Security Command building, which is being replaced by its Seoul branch.

In an attempt to get people more familiar with the brand “Uul,” there are about 10 items featuring the logo in bright colors, including eco-friendly bags, umbrellas, mugs and stationery.

The shop also is a place for some rest and reading. There are designer chairs where customers can sit and enjoy art books that are often not available at bookstores.

But perhaps the best part about the shop of the National Museum of Contemporary Art, Korea, is that every six months it dedicates its space to a certain artist and transforms it according to the artist’s colors and styles.

Picture this: At the center of the shop are the artist’s main works. Products with those works as motifs are for sale. Audio and video clips in relation to the artist are being played. People who enter this space would naturally be immersed in the world of the artist.

Officials say that in this way, the shop is more than just a souvenir shop; it is a space for displays and sales as well as rest and experience. “In any given year, 99 percent of Koreans don’t visit a museum,” says Kang Seung-wan, director of the business development team at the museum.

“But the 21st-century museum is not just for exhibition. Hoping that people would acknowledge museums as a place for rest and entertainment, we changed our shop into a gallery-lounge.”

The first artist the shop featured was installation specialist Ahn Kyu-chul and then Korean-style painter Suk Chul-joo. Lamps with Suk’s paintings as a motif were sold out.

Currently the shop is featuring designer Moon Young-hee, who is active in Paris, under the theme “The Freedom of Transformation and Volume.” Moon’s clothes, which cost well over 1 million won ($885.47), are being sold at a much more affordable price and are introduced as limited editions at the shop. This has drawn many Japanese tourists familiar with Moon’s work, according to the museum.

“It could look odd to collaborate with a fashion designer,” says Kim Yoon-hee, a spokesperson for the museum.

“But fashion is finding its way into the realm of contemporary art and museums are seeking to become closer to the public using fashion as a vehicle.”

She said one such case was the Alexander McQueen Exhibition at the Metropolitan Museum of Art last year that attracted more than 650,000 visitors, becoming one of the 10 most visited shows in the museum’s history.