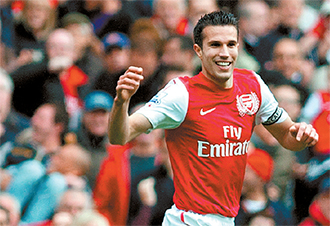 
LONDON - Manchester United is set to complete the signing of Robin van Persie from Arsenal on Thursday after the Premier League rivals reached an agreement over the sale of the Netherlands striker.

Both clubs released statements on their Web sites on Wednesday saying personal terms still needed to be finalized and that a deal was subject to a medical examination.

No financial details were disclosed by either United or Arsenal, although British media has reported that the London club wanted 20 million pounds ($31.3 million) for its captain, who has one year left on his contract.

“Arsenal Football Club can confirm that terms have been agreed for the transfer of Robin van Persie to Manchester United,’’ the Arsenal statement said. “Van Persie will travel to Manchester on Thursday in order to agree personal terms and complete a medical ahead of the proposed move.’’

The Dutchman, who joined from Feyenoord in 2004, was the Premier League’s top scorer last season with 30 goals. But he has refused to sign a new contract with Arsenal, saying he wasn’t happy with the direction the club was heading.

Arsenal hasn’t won a trophy since 2005 and has been unable to keep hold of its leading players in recent seasons, with midfielders Cesc Fabregas joining Barcelona and no fewer than four players have left for Premier League champion Manchester City - Samir Nasri, Emmanuel Adebayor, Kolo Toure and Gael Clichy - since 2009.

Man United was two minutes away from having its name engraved on the Premier League trophy for the 13th time last season before City miraculously scored twice in added time against Queens Park Rangers to win the title on goal difference.

“It’s a cruel way [to lose the title],’’ Ferguson said at the time. “We’ve experienced many ups and downs in the 25 years I’ve been here. Most of them have been great - we’ve won the title three times on the last day. Today we nearly did it.’’

While City has only the 2011 FA Cup to add to its first league title in 44 years, Ferguson is sufficiently wary of the spending power of City owner Sheikh Mansour to try and significantly strengthen United’s squad. City’s Abu Dhabi-based owner has invested more than $1 billion since taking over the club in 2008.

The 70-year-old Ferguson needed an experienced striker to sharpen United’s attack for the season ahead and he can’t have done much better than the deal for Arsenal’s van Persie.