Pitcher Felix Hernandez is perfect vs. the Bay Rays

Pitcher Felix Hernandez is perfect vs. the Bay Rays 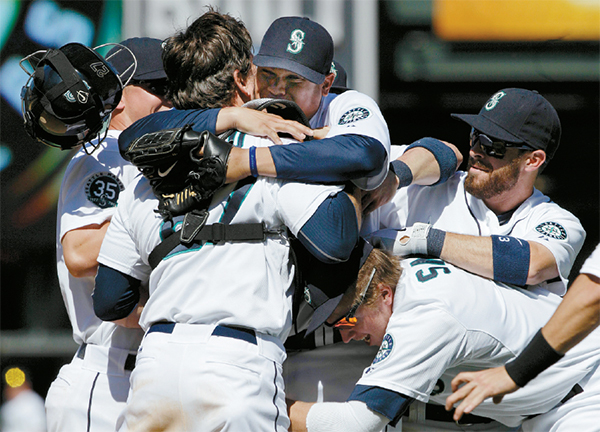 Seattle Mariners pitcher Felix Hernandez is mobbed by teammates, including catcher John Jaso, after he threw a perfect game against the Tampa Bay Rays, during a baseball game on Wednesday in Seattle. The Mariners won 1-0. [AP/YONHAP]


Felix Hernandez pitched the third perfect game of the season and 23rd in major league history in leading the Seattle Mariners to a 1-0 victory over the Tampa Bay Rays on Wednesday.

“I had more command as the game was going on,” Hernandez told reporters after tossing the first perfect game in Mariners history. “Breaking balls, curve balls, sliders, change-ups. Everything was good today.”

When Rays third baseman Sean Rodriguez struck out looking to end the game, Hernandez raised both arms to the sky before being mobbed by his teammates.

Hernandez, who struck out five of the last six batters he faced, has won eight straight decisions, including four shutouts since June 28.

Known as “King Felix,” Hernandez said he approaches each start like he is ready to toss a perfect game.

“It’s always on my mind,” he said. “Every game [I’m thinking], ‘I need to throw a perfect game.’ For every pitcher. Today it happened. It’s something special. This is pretty amazing.”

Hernandez (11-5) said he knew early on that he was in control.

“When I was warming up in the bullpen I was thinking I had pretty good stuff,” he said. “Since the third [inning], I was like, ‘There’s something going on right now.’ ”

Hernandez said it was “awesome” that the fans at Safeco Field got to see his masterpiece but the day was not without regrets.

“I’m a little sad that my wife flew back to Venezuela last week,” he said. “Kids are not here. I’m alone, man.”

It was the first time that three perfect games have been thrown in the same season.

Philip Humber of the Chicago White Sox tossed a perfect game over the Mariners in April, while San Francisco’s Matt Cain set down all 27 batters in a 10-0 whitewash of Houston in June.

Mariners catcher John Jaso said it “only seems like a matter of time” until a pitcher of Hernandez’s ability tosses a perfect game.

“This game is weird, a little dribbler here or something and it’s ruined,” he said. “But [Hernandez’s] competitive attitude and his competitive mind that he brings out to the mound every time he pitches, you know you’ve got a guy out there that gives you a chance to win.

“That was the biggest thing there, going out for that win, and all this other stuff - keep making your pitches - the odds are going to go in your favor eventually.

“This guy deserved the odds to fall in his favor today, for sure.”

The perfect game marked the fourth time in the last four years that the Rays have been the victims of a no-hitter.

Mark Buehrle of the Chicago White Sox tossed a perfect game against the Rays in 2009, as did Dallas Braden of the Oakland Athletics in 2010. Later in 2010, Arizona’s Edwin Jackson blanked the Rays on a no-hitter.

On Wednesday Seattle scored its lone run in the third inning on an RBI single to left by designated hitter Jesus Montero.

“Today, all of Felix’s pitches were working,” said Jaso. “You throw any lineup out there you’re getting close to the same result today.” Reuters