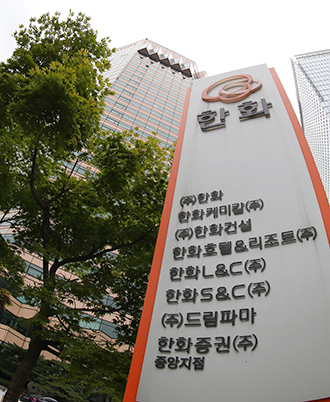 An image of Hanwha Group’s headquarters in Janggyo-dong, central Seoul. The main entrance of the building was shut down yesterday at the news of Chairman Kim Seung-youn’s imprisonment. [YONHAP]

The four-year sentence is testament to the judiciary’s resolve to punish economic crimes by chiefs of the family-run conglomerates.

The Federation of Korean Industries released no official statement, but an official of the business lobby said, “It is a pity to put a businessman in prison at an economically tough time.”

The court’s ruling came at a sensitive time ahead of the presidential election in December. Politicians from both the ruling and opposition parties are calling for reform of family-run conglomerates focused on reaping private benefits by wielding immense power across the national economy and society.

Chaebol families in Korea have been under fire for avoiding judicial punishment when they commit white-collar crimes like embezzling corporate money for personal gain.

Now that one of the heads of the 10 largest conglomerates is going to jail, attention is shifting toward the possible imprisonment of SK Group Chairman Chey Tae-won and Kumho Petrochemical Chairman Park Chan-koo.

Chey is scheduled for trial in early October on charges of embezzling 180 billion won ($158.7 million) of the group’s money to invest in futures. He was indicted but not arrested in January, after a police investigation of more than a year.

Chey was sentenced to three years in jail and five years of probation for a 1.5 trillion won accounting fraud in 2006, but was granted amnesty by President Lee Myung-bak in 2008.

Park will be on trial for the third time Aug. 27. He allegedly stole 30 billion won via an intermediary of Kumho Petrochemical. He also is accused of insider stock trading to avoid a 10.2 billion won loss in 2009. 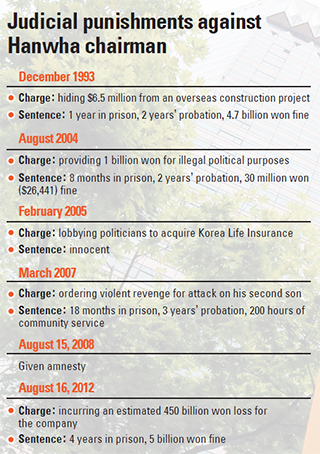 Seven of 10 business moguls convicted since 1990 have been sentenced to prison, but all of them were released and put on probation.

But that may be changing amid the war of words over “economic democratization” and politicians targeting chaebol.

In February, after Taekwang Group’s former Chairman Lee Ho-jin was sentenced to four years and six months in prison and fined 7 billion won, business lobbying organizations remained silent instead of calling for leniency as they had in the past.

Meanwhile, employees and executives at Hanwha expressed embarrassment and deep concern about the group’s future at a critical time for the company.

“Hanwha’s employees never expected this sort of result because our chairman has done nothing wrong,” said an official at the group. Employees believed prosecutors didn’t have any evidence to convict Kim, according to the official.

Kim, unlike his public image as a “gang leader,” is respected by his employees, who are deeply loyal to him.

The police investigation began in September 2010, and Kim continued to work on building business at home and abroad. He flew to Iraq in early June to sign a contract for the construction of a new city in Bismayah, 10 kilometers (6.2 miles) southeast of Baghdad.

He was sentenced to nine years in prison last month. After Kim was taken into in custody yesterday, Hanwha officials moved quickly to prepare for the vacancy of the chairman.

“We are watching carefully if the Iraqi government is sending us any message regarding the chairman’s arrest,” said one official.

The 9.4 trillion won Iraqi city contract is the largest overseas project ever won by a Korean company.

The 60-year-old business tycoon also clinched a deal Aug. 2 with Japan-based trading company Marubeni to supply solar modules for the next four years to 167,000 Japanese households, and he harbored ambitions for the photovoltaics business as a new growth engine for the group.

The chairman’s oldest son, Dong-kwan, who is a 30-year-old Harvard graduate, was sent to China to lead the strategy division of Hanwha SolarOne, the group’s photovoltaics unit.

It is the third time Kim has gone to jail in five investigations. He was imprisoned in 1994 for hiding $6.5 million, part commission fees returned to then-Pacific E&C, the group’s construction unit, in a contract with Saudi Arabia. Kim was found guilty of using the money to buy a mansion in California and for other personal expenses.

He was sentenced to a year in prison and two years’ probation and fined $4.7 billion. He was released after two months.

In 2007, Kim made headlines with the so-called “gangster” incident. The chairman mobilized about 10 bodyguards to avenge injuries inflicted on his second son, Dong-won, a 28-year-old Yale graduate, who insisted that he had been beaten by bar employees at a karaoke in Cheongdam-dong, southern Seoul.

Kim was sentenced to 18 months in jail at the time.