End of the road for Seoul-Tokyo currency swap?

End of the road for Seoul-Tokyo currency swap? 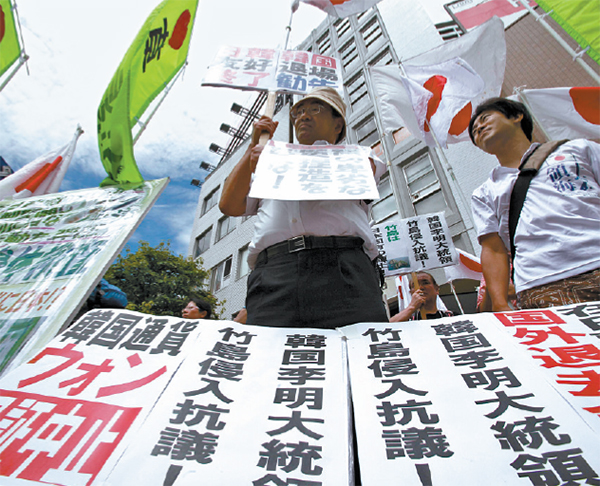 Members of the nationalist movement Ganbare Nippon take part in a protest against President Lee Myung-bak’s visit to Dokdo, which Japan calls Takeshima, near the South Korean Embassy in Tokyo yesterday, a day after the 67th anniversary of Japan’s surrender in World War II. [REUTERS/YONHAP]


As the diplomatic tension between Korea and Japan over the disputed Dokdo islets and the issue of wartime sex slaves rises, the prospect of these squabbles spilling over to muddy economic ties is becoming more of a threat.

The recent currency swap contract between the two became a hot issue yesterday as Japan hinted that it may scrap the deal.

As Korea celebrated the 67th anniversary of its independence from Japan’s colonial yoke on Wednesday, Japanese Cabinet Secretary Osamu Fujimura suggested the deal, which is set to expire in October, may not be renewed.

Fujimura was responding to President Lee Myung-bak’s comments that the Japanese emperor and its government should officially apologize for former wrongs, including the issue of forcing Korean “comfort women” to work in wartime brothels over half a century ago.

Seoul has been proceeding cautiously, with the Ministry of Strategy and Finance issuing a statement announcing that it has not yet received any official notification on the matter from Tokyo.

“There is still time [to resolve the matter] as there are nearly three months left before the swap contract expires,” a Finance Ministry official said. “We don’t think the government should comment on this issue at this stage.”

Japan became the first country to sign a currency swap deal with Korea in July 2001, when the two sides drew up an agreement worth $2 billion. Since then, Korea has been aggressively chasing similar deals with other countries.

In October, the two neighbors expanded the deal from $13 billion to $70 billion. It is now seen as a major safety net given export-dependent Korea’s acute vulnerability to sudden changes in global markets and helped restore stability when the global credit crunch hit in late 2008. 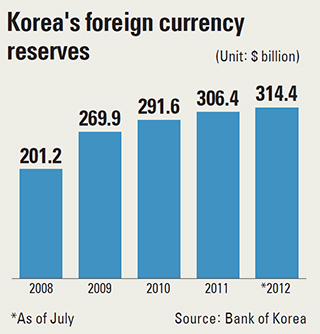 As Korea learned in the late 1990s in the wake of the Asian financial crisis, a sudden exodus of foreign currencies by offshore investors not only threatens to disrupt a nation’s financial market, but the entire economy.

The enlarged currency swap with Japan was also interpreted as a friendly gesture to help overcome past differences through ramped-up economic cooperation, and a breakup of the deal would give Korea less ammunition to use in times of crisis.

However, the Finance Ministry has expressed confidence that the nation’s foreign currency reserves are sufficient to weather any coming storms.

As of July, the reserves stood at $314.4 billion. Korea also has a $56 billion currency swap deal with China and could tap up to $38.4 billion of funds from the Chiang Mai Initiative in the event of an emergency.

“The situation is quite different from 2008,” said a ministry official. “Not only have the foreign currency reserves exceeded $300 billion, but the currency swap deal with China has also been expanded, so any fallout on the financial sector will be limited.”

Yet he acknowledged the importance of the currency swap with Japan in terms of its psychological effect on investors and the financial market.

The Korean won sank 4.4 won yesterday to close at 1,134 to the U.S. greenback after news broke that the Japanese government was considering revising or canceling the currency swap deal. There are also concerns that the thorny ties between Korea and Japan could affect tourism and other industries.