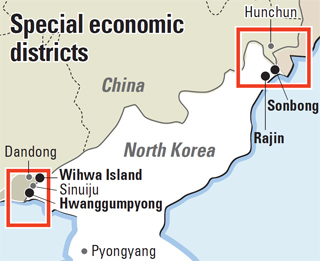 Pyongyang and Beijing reached a consensus to launch full-fledged development in joint economic zones, viewed as an attempt at a market economy in that specific region.

The North’s official Korean Central News Agency yesterday reported the result of the so-called “meeting of the DPRK-China cooperation committee for the third joint development of Hwanggumpyong and Rason districts,” where Jang Song-thaek, uncle of North Korean leader Kim Jong-un, attended with his counterpart Chen Deming of the Ministry of Commerce and other Chinese government officials.

There, the KCNA said that both sides signed a deal called “Comprehensive Plan for Rason Economic Zone,” a joint enterprise zone near the border of the two countries in which they will carry out full-scale construction for a harbor and railroads.

Once construction is completed, they will launch operation committees for various businesses, such as tourism and agriculture. A project for directing electricity from China to the region has already been prepared, state media reported.

“They reached an agreement to arrange an environment for profitable investment that complies with international standards and mutual interest,” the KCNA reported.

“They will encourage local governments and companies to invest in these projects.”

China’s Commercial Ministry Tuesday said that the two countries signed a four-part agreement: adoption of market economy in the zones, government-led projects, allowing private companies to develop the zones and striving for mutual interests between the two countries.

They will basically develop three districts, the Chinese ministry said, which are Hwanggumpyong, the Rason Economic Zone and Wihwa Island, an island in the Yalu River.

The ministry said that they will build telecommunications facilities and an office in the three districts.

The joint venture investment committee, a North Korea-China organization that dealt with the economic zones, will be dissolved, the ministry said. Instead, new operation committees will be launched in the three zones.

A source in Beijing told the JoongAng Ilbo that after the meeting, both parties also reached a decision to boost cooperation between local governments in China and North Korea.

“After the meeting, provincial governments in China signed contracts with the North over dividing specific roles in developing Rason, Hwanggumpyong, and Wihwa Island more efficiently,” the source said.

Under the contract, Jilin Province in northeastern China will provide power and telecommunications facilities to the Rason district, while Liaoning Province will construct roads and attract foreign investors to Hwanggumpyong and Wihwa Island, the source said. The North Hamgyong and North Pyongyang provincial governments will provide labor in return.

So far, foreign investors have been reluctant to put their money into North Korea’s two trade zones, Rason and Hwanggumpyong, due to poor infrastructure and insufficient government support.

Sources told the JoongAng Ilbo that many Chinese and Russian companies suspended construction in the Rason zone because of poorly paved roads and insufficient power supply.

Even if they invested money in the region, the North Korean regime extorted their money.

A private Chinese company called Xiyang Group has invested about 240 million yuan ($37.7 million), but the North Korean regime unilaterally breached the deal and expelled investors from the zone. Xiyang Group’s money was not returned.

However, controversy still remains over how they would adopt a market economy in the border region.

Speculation is rising that Jang would possibly meet with President Hu Jintao during his six-day stay, as part of efforts to normalize relations with China that have deteriorated since the North’s long-range ballistic rocket launch in April.

“Given the current situation in the North, Jang’s visit is apparently intended to resolve urgent economic matters,” said Yang Xiyu, a senior research fellow at the China Institute of International Studies.

“We need to focus on any changes in Kim Jong-un’s new diplomacy from now on.”