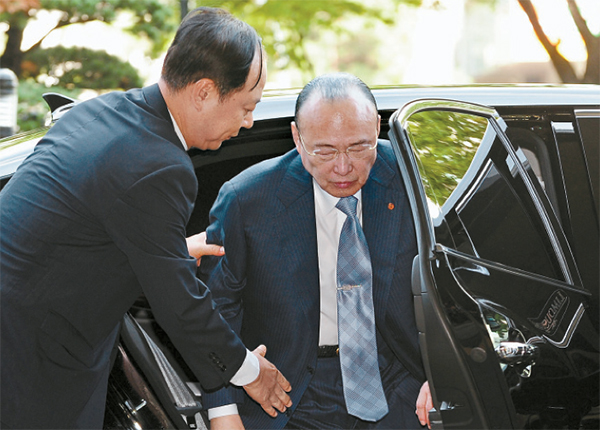 Hanwha Group Chairman Kim Seung-youn, right, gets out of his car yesterday to appear at a hearing at the Seoul Western District Court. [NEWSIS]

Hanwha Group Chairman Kim Seung-youn was jailed yesterday immediately after a local court handed down a four-year prison term and a massive fine for embezzlement and breach of trust.

Judge Suh Kyeong-hwan convicted him of using the conglomerate’s money to pay back debts of companies that he ran under borrowed names and incurring losses to the group by selling stakes to his family at cheaper prices.

In his verdict, Suh made it clear that Kim was facing stern punishment because he abused his power as the owner of a conglomerate.

Two other senior executives of Hanwha Group were also convicted yesterday of acting on Kim’s orders.

Hong Dong-ok, former chief financial officer for the group and now CEO of petrochemical company Yeochun NCC, was ordered to serve four years in prison and pay a fine of 1 billion won. Kim Kwan-soo, former head of Hanwha Resorts, was convicted of helping Kim to raise slush funds and sentenced to serve two years and six months in jail.

They were also sent directly to prison from the courtroom.

Immediately after the sentencing, Hanwha Group said yesterday it will appeal the convictions.

“As the controlling stakeholder of the Hanwha Group, Kim used his and the management planning team’s influence to mobilize group affiliates to illegally support insolvent companies that he owned under false names,” Judge Suh said. “By doing so, Kim incurred 288.3 billion won in losses to the group affiliates.”

The court also convicted him of selling stakes in the group affiliates at lower than market prices to his elder sister, causing a 14.1 billion won loss to the conglomerate. Kim was also found guilty of tax evasion to the tune of 1.5 billion won.

Suh made it clear that the judiciary found enough evidence to convict and sternly punish Kim. “Kim was the largest beneficiary of all crimes and he needs to be punished sternly because he failed to repent for his wrongdoings,” Suh said.

“Although Kim argued that Hong was the sole mastermind of all the crimes, it appeared that the Hanwha Group has a strict hierarchy, of which he is at the top,” the judge continued. “Documents confiscated by the prosecution showed that Chairman Kim was called ‘CM’ in the headquarters and that CM was regarded almost like a god and the absolute object of loyalty, while the headquarters was described as nothing more than an organ to assist CM.” The court, however, acquitted Kim of the charges that he had sold Hanwha S&C’s shares to his three sons at prices cheaper than market value. The court said the price calculation of the stakes was reasonable.

The probe into Hanwha Group’s chairman and top executives began in August 2010, and the prosecution summoned 321 people for questioning and conducted 13 raids before indicting the owner of one of the nation’s largest conglomerates in January of last year.

Kim and 10 others were indicted on charges of sending 320 billion won of corporate money from 2004 to 2006 to pay the debts of companies that were owned by Kim but disguised as Hanwha subsidiaries. They were also accused of selling stakes in two Hanwha affiliates at deliberately cheap prices to Kim’s family, incurring a 104.1 billion won loss to the group.

On July 16, the prosecution asked the court to punish Kim with a nine-year prison term and a fine of 150 billion won.

While yesterday’s punishment was less than what the prosecution asked for, it was unusual for the court to order Kim jailed immediately after sentencing.

The judges left the bench after they gave their ruling, and Kim sat motionless in his chair. After shaking hands with his executives, he stumbled as he was escorted to the door for prisoners. The Korean judiciary has often shown leniency toward business tycoons by suspending their jail terms, citing concerns that their imprisonments would hamper the national economy. With growing demands for economic justice, the practice recently saw changes. Yesterday’s sentencing was a clear example.

“Taking into account the public desire for stern punishments against economic crimes, sentencing guidelines were created in July 2009,” said Judge Kwon Chang-yeong, spokesman for the Seoul Western District Court. “And they were strictly applied in yesterday’s sentencing.”

And the trend is expected to remain in place, Kwon said.

“It will be hard to ignore the guidelines created by the Supreme Court and show leniency,” he said.

The guidelines say a prison term between four to seven years should be handed down for the conviction of embezzlement or breach of trust worth more than 5 billion won and less than 30 billion won.