Mixing work and play as a mobile game developer

Mixing work and play as a mobile game developer 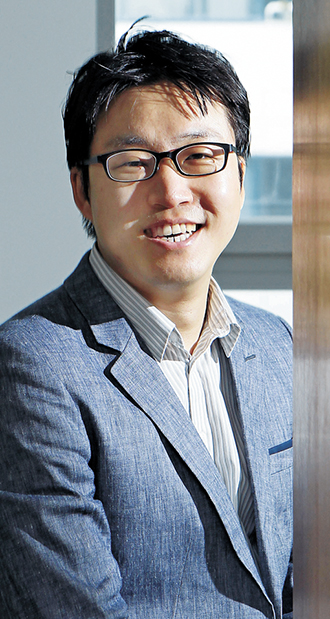 When he was a freshman at Yonsei University’s College of Law in 1996, game developer Shin Jae-chan was a modern-art enthusiast. Art classes felt like a respite for the law student who had to peruse through legal tomes, he said.

Shin was fascinated by “Bird in Space” by Rumanian sculptor Constantin Brancusi. Despite what the title suggests, the sculpture has no wings. “I thought the sculpture reflects human’s craving to fly,” he said.

After a decade, Shin created a social game Rule the Sky for smartphones. The background setting of this game is a castle in the sky.

A year after its launch, more than 4.5 million people have subscribed to the game. About 750,000 users play the game every day. Rule the Sky has earned 4 billion won ($3.5 million) in sales.

“Actually, I can’t play games that well, but that has become my competitive edge,” Shin said. “I pursue fun because I am a novice player.”

Shin’s father wanted his son to become a lawyer. The youngest of three sons, Shin listened to his father and studied for the national law examination for three years.

During his three-year fight against himself, Shin often played an online game called Hero.

It was a coincidence that the company that developed the game was near Shin’s house.

One day, he visited the gaming company to ask questions. Shin shared his opinions about characters in the game to the person who had developed them. Later, he was offered a chance to collaborate with the company to create a new game.

After graduating from university, Shin joined NCsoft to work in the gaming industry, giving up his earlier dream of being a lawyer. His parents were in strong opposition to his decision, he said.

He joined JCE, the birthplace of Rule the Sky, as a team leader for mobile games in 2009.

“The ‘Long Tail’ theory is being applied to the gaming industry these days,” Shin said.

According to him, there is a change in the pattern of gamers in the mobile era. Unlike sitting in front of the computer screen for hours to play a game in the past, people play games on their smartphones on their way to the office.

In order to develop games that reflect stories of humans, Shin reads two to three books on humanities every month.

Indeed, his game Rule the Sky has some rather unique functions like stealing a friend’s stuff and helping out friends.

These functions effectively appeal to players, since they represent exchanges between one and another in society.

After JCE was acquired by Nexon, the largest game developer in Korea, in February, the 37-year-old game developer has set up his own company in April with 10 colleagues who collaborated on the development of Rule The Sky.

Shin signed a contract with NHN Han Game to service a new game in June. NHN said the contract was made based on Shin’s capabilities and experience.