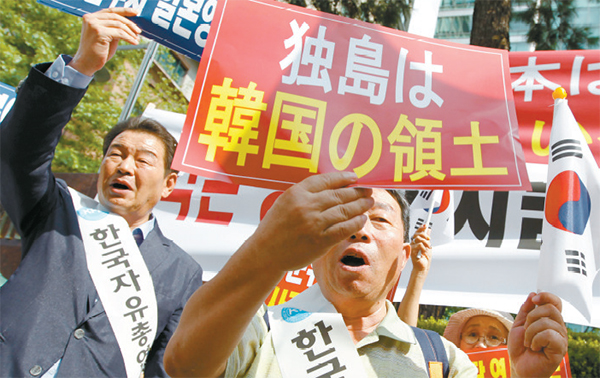 Members of the Korea Freedom Federation shout slogans during an anti-Japan protest in front of the Japanese Embassy in Seoul yesterday. The sign reads, “Dokdo is Korean territory.”[REUTERS/YONHAP]


Seoul’s Foreign Ministry yesterday strongly protested Tokyo’s proposal to take the issue of Dokdo to the International Court of Justice (ICJ) by issuing an official commentary, calling Japan’s proposal “not worth attention.”

“Dokdo is clearly part of Korean territory historically, geographically and under international law, and no territorial dispute exists,” said Cho Tai-young, spokesman at the Ministry of Foreign Affairs and Trade. “The Japanese government’s proposal to take the Dokdo issue before the ICJ is not worth attention.”

Cho added, “The Korean government will take stern measures against any provocations made by Japan over Dokdo,” but did not elaborate on what actions Korea would take.

Earlier in the day, Japan’s Chief Cabinet Secretary Osamu Fujimura announced the proposal to ask the ICJ to resolve the issue as tension has been growing between the two countries over the islets’ sovereignty.

To take the issue to the international court, however, the two parties involved in the territorial dispute must consent, and since Korea has flatly rejected Japan’s proposal, taking the matter before the ICJ will not be feasible.

The tension comes after President Lee Myung-bak made an unprecedented visit to Dokdo on Aug. 10, five days before Korea celebrated its Liberation Day on Wednesday.

His visit is considered an effort to deliver a firm message to Japan that Korea has sovereignty rights over the islets. President Lee’s strong message, along with mentioning Japan’s wartime atrocities, prompted Tokyo to temporarily recall Japanese Ambassador to Korea Masatoshi Muto.

“As we have spoken about this issue on many occasions before, we will not respond to the proposal by Japan,” said a senior official at the Foreign Ministry.

“The government’s stance is that there’s no territorial dispute over Dokdo because the land is clearly part of Korean territory historically, geographically and under international law. We have neither any reason for us to go to the ICJ nor any intention to go there.”

According to the ministry official, yesterday’s proposal was the third of its kind made by Japan after 1954 and 1962. Both proposals, however, were not accepted by the Korean government. In 1954, the Japanese government protested Korea’s move in setting up an unmanned lighthouse on Dokdo.

It sent its first official diplomatic document to the Korean government with the proposal. In 1962, in the course of negotiating the establishment of possible diplomatic relations, Japan again raised the prospect of taking the territorial issue to international court. The two countries’ diplomatic relations began in 1965.

The latest renewal of claims by Japan was made last month in its annual “Defense White Paper” report where it stated “The territorial issues of the Northern Territories and Takeshima, which are Japan’s own territories, remain unresolved.”

“Korea’s basic position on Dokdo is that no territorial dispute exists regarding Dokdo, and Dokdo is not a matter to be dealt with through diplomatic negotiations or judicial settlement,” said Nam Sang-koo, a researcher at the Northeast Asian History Foundation. “It isn’t necessary for Korea to accept Japan’s proposal [to stand before the ICJ].”