3 contenders reportedly have interest in Choo

3 contenders reportedly have interest in Choo 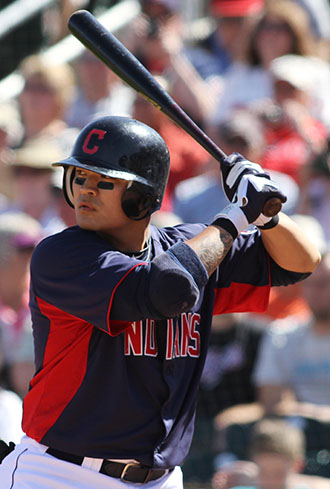 Outfielder Choo Shin-soo still has a chance this year to realize his dream of being the first Korean to play in the Major League playoffs, despite the fact that his team, the slumping Cleveland Indians, are mired in losses with 11.5 games behind the division leading Chicago White Sox.

Last Saturday, Choo hit a two-run homer, his 15th of the season, in an 8-5 loss to the Oakland Athletics, extending the Indians’ losing streak to four. On May 28, the Indians were atop the American League central division after a three-game sweep of the Detroit Tigers. The second-place Tigers are now 10 games ahead of Cleveland.

Trade rumors of Choo have been circulating around the league, and last Saturday Reuters reported that the 30-year-old outfielder who is in his sixth season with Cleveland could find himself with a new team by the Aug. 31 waiver trade deadline.

Players traded after the deadline are not eligible to play in the playoffs or World Series.

Choo has turned in a solid performance this year after coming off his worst season in the majors last year, when he battled a thumb injury and was arrested for drunken driving in May.

Through Saturday, Choo was hitting .284 with a .368 on-base percentage and .470 slugging percentage.

In an interview with MLB.com late last month, Choo said he would not request a trade, but made it clear that advancing to the postseason is a bigger priority for him than sticking with the Indians. “The most important thing is I want to win,” said Choo. “I want to make the playoffs.”

According to FoxSports.com, three of the teams that have been identified as having an interest in Choo all have playoff aspirations: the Cincinnati Reds and Pittsburgh Pirates, first and second in the National League Central Division, and the defending American League champion Texas Rangers, who are leading the West division.

Choo, whose agent is Scott Boras, will become a free agent after the 2013 season. Prior to this season, he signed a one-year extension with the Indians that pays him $4.9 million ($5.5 billion won) in 2012.