QPR suffers a drubbing in debut for Park

QPR suffers a drubbing in debut for Park 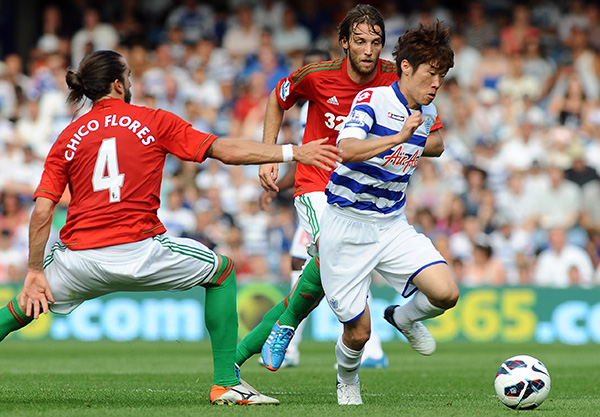 Park Ji-sung dribbles the ball against Chico Flores of Swansea during the EPL match at Loftus Road Stadium in London on Saturday. [PENTA PRESS/YONHAP]


Queens Park Rangers captain Park Ji-sung set another milestone early yesterday as he became the first Asian to be captain of an English Premier League team.

But the captain’s armband could turn out to be as much a burden as an honor for the 31-year-old midfielder who played seven years with Manchester United. QPR suffered a 5-0 rout in theier home turf, Loftus Road Stadium in London.

Park, who replaced Joey Barton as captain for QPR, played the whole match against Swansea City.

Barton, a 29-year-old midfielder, was given a 12-match ban for misconduct in last season’s final match against Manchester City and is rumored to be traded soon.

Park, who signed a two-year contract with QPR last month, entered the match with high expectations that he would show the skills he displayed with the Old Trafford side.

His role as a play maker, however, was limited by lackluster teamwork and slack defense.

Swansea, the Welsh football club, capitalized on it and thrashed the west London side with two goals each by Spanish midfielder Michu, including one in the eighth minute, and Nathan Dyer, and the closer by Scott Sinclair.

QPR’s defense was dissolved further in the second half, when the team allowed four goals starting with the one in the 52nd minute.

“We were very much in the game when we were 1-0 and 2-0 down. But in the end we couldn’t get back as we made poor decisions and were picked apart,” Hughes said. “We need to perform better than we did today.”

Apart from Park, QPR brought six more players from other teams during the summer transfer season, including Robert Green from West Ham United, Fabio Da Silva from Manchester United, Junior Hoilett of the Blackburn Rovers and Samba Diakite from French club Nancy. That has hurt teamwork as some of the new players were not given sufficient time to be blended into the team and as a result resorted to their individual skills during the match against Swansea.

Park tried to stem the tide, but Sky Sports said it was an ineffective effort and that Park was “largely anonymous.” It gave only five points to him for the performance against Swansea.

“He’s integrated very, very well, as you would expect,” Hughes was quoted as saying by Sport Review. “He’s an outstanding player. He’s got real presence in the group and great experience as well.”

QPR, which barely survived a three-team relegation by finishing 17th last season, aims to stay in the middle of the standings for the new season. QPR’s next game is against Norwich City on Saturday.

The coach said that he plans to diversify Park’s role to maximize his talent.

“He’s like many of the players in the sense he’s got the ability to play in a number of different positions, which I like,” Hughes said.