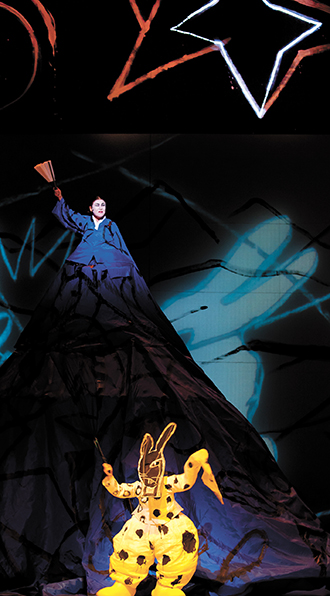 The National Theater of Korea’s first show of its “National Repertory Season” is “Mr. Rabbit and the Dragon King,” a Korean pansori, or traditional folk performance. The theater’s schedule this year focuses more on national companies. Provided by the National Changgeuk Company of Korea

The National Theater of Korea has released its schedule for the “National Repertory Season,” which begins on Sept. 5. This year’s performances, which amount to 79 in total, are part of the theater’s ambitious overhaul of its scheduling, which has been criticized for relying too heavily on foreign acts.

Each of the eight leading national companies will perform at the National Theater this cycle, according to the schedule, including the National Ballet Company and the Korea National Opera.

While the Royal Opera House in London, the Teatro alla Scala in Italy and Lincoln Center in the United States feature renowned acts, both domestic and foreign, the National Theater of Korea has seldom been home to the country’s top national companies.

The National Theater of Korea was too busy providing spots for private organizations, critics often complained.

Ahn Ho-sang, president of the National Theater, said this year’s schedule hopes to address those criticisms.

“The opening of the national repertory season will break this vicious cycle,” he said.

“Before, if the national theater were utilized exclusively by the national art companies, private organizations would have nowhere to perform. But the environment has transformed as there are presently various decent private theaters.

“Now is the time for the National Theater of Korea to once again recover the publicity it had achieved in the past. The national theater should produce authentic Korean performances,” Ahn said.

The content of the productions is essential, he continued. This year, theater producers Han Tae-sook, Yun Ho-jin and Seo Jae-hyeong are having a go at the production of changgeuk (Korean classical opera) such as “Janghwa and Hongryeon,” “Seopyonje,” and “Media.” 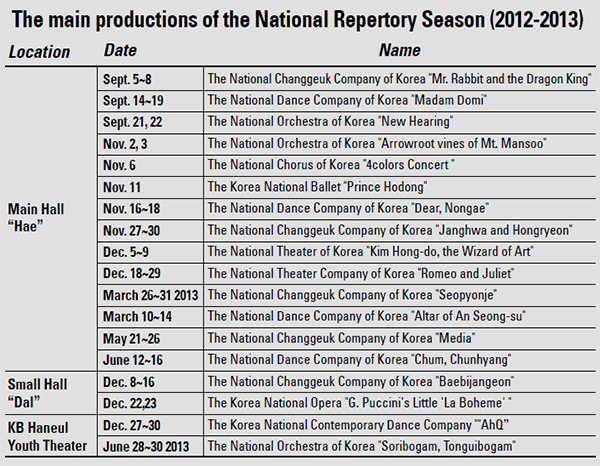 In dance performances, tradition meets modernity as contemporary dancer An Seong-su is in charge of the choreography of the National Dance Company of Korea.

Producers from foreign countries are also participating in the series, including German opera director Achim Freyer in “Mr. Rabbit and the Dragon King” and Tian Qinxin in “Romeo and Juliet.” There are rumors that world-renowned Chinese director Chen Kaige may also participate.

“The pansori [a genre of Korean traditional music] and changgeuk [traditional Korean opera] are well-admired by foreign artists who see them as avant-garde,” said Kim Sung-yeo, the art director of the National Changgeuk Company of Korea.

Ahn agreed that traditional Korean performances have potential to become increasingly popular. He said he hopes this year’s performances will help push the companies in that direction.

“It is true that many perceive these performances as boring and unexciting, but I hope that those kinds of perceptions will change after viewing the repertory season.”