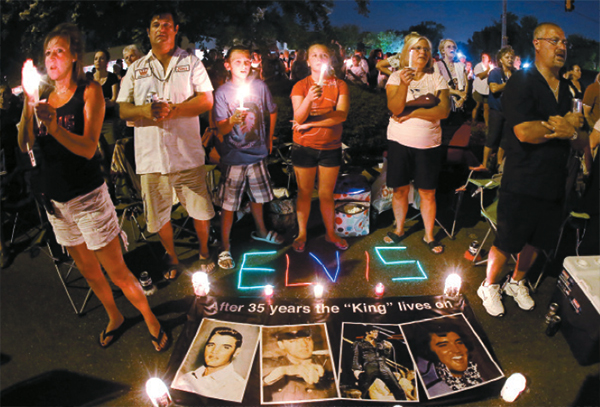 
MEMPHIS - Elvis Presley was long dead when he entered the life of Victor Trevino for ever.

“I was in my living room,” the 27-year-old professional Elvis tribute artist - please, don’t call them impersonators - recalled Thursday, the 35th anniversary of the sudden death of the king of rock ’n’ roll at the age of 42.

“My parents played ‘Teddy Bear’ for me, and then they had me perform the song at a talent show when I was elementary school - I was like in the fourth grade,” or about 10 years old, he told AFP.

“I had my glasses on. I slicked my hair back. I had khakis on, and a little blazer and pink shirt and penny loafers. I always liked to perform.”

As Elvis Week winds down, after a moving candlelight vigil Wednesday at Presley’s sprawling Graceland estate, the spotlight is turning onto the unusual thespians who dedicate their lives to mimicking a pop-culture icon on stage.

Twenty-nine of them, from Australia, Britain, Canada, Japan and the United States, are vying for top honors in the sixth annual Ultimate Elvis Tribute Artist Contest.

The finals take place Saturday. Most of the 29 were children when Presley died, but a handful - like Trevino, from Fort Worth, Texas, and fellow contestant Eli Williams, 24, from Delta, British Columbia, Canada - had not yet been born.

They are the relative newcomers to Elvis fever.

“I kind of caught it myself when I was 17 in high school,” the bespectacled Williams told AFP, “and it just took a life of its own. I started buying record after record. Eight years on, here we are.”

Countless hours of perfecting his vocals and pompadour ensued for Williams, with mentoring and encouragement from compatriot Brian Simpson, who has carved out an unusual career teaching people to walk, talk and act like Presley.

During a meet-and-greet Thursday in the Hard Rock Cafe on Memphis’s historic Beale Street nightclub strip, the Ultimate Elvis contestants mingled like old friends with the predominantly older, female and gleeful crowd.

More than their haircuts, their greased-back haircuts or their mutton-chop sideburns, it was their easy rapport with the fans and their impeccable good manners - both characteristics of Presley himself - that stood out.

“It takes a lot of dedication, a lot of years of experience (and) a lot of work in the gym trying to stay in shape, and just loving him and loving the fans,” said Stephen Freeman, 41, an Elvis tribute artist for 15 years.

He said the key to success is to avoid copying Presley too much.

“I’m told I have facial features similar to Elvis, and I do appreciate vintage rockabilly style and music,” said Trevino, sporting a sharp 1960s chambray suit like the ones office workers in sultry Memphis once wore.

“However, I’m still true to myself because Elvis was true to himself. That’s what made him so unique and so fun to watch and so amazing. All tribute artists are more interesting when they add a bit of themselves to their performance.”

Williams agreed: “None of these guys here is trying to be Elvis. This is just our way of paying tribute to him.”

Both younger men brought to Memphis a keen sense of its rich musical history as a cradle of rock ’n’ roll, soul and blues, and of its darker past as a hotbed of racial tension where civil rights hero Martin Luther King was slain in 1968.

Williams, whose far-ranging taste in music runs from Jimi Hendrix to rapper Cee Lo Green, has checked out the Stax recording studio (now a museum) where Otis Redding, among many others, laid down some of soul music’s greatest tracks.

Trevino, meanwhile, has just recorded an album at Sun Studios - where Presley cut his first hits in the 1950s - with his own band, using only old-school analog technology. It’s due out in a few months.

His mind wandered back to the tumultuous era when Presley, the only son of a poor white laborer from rural Mississippi, grew to be one of the greatest entertainers of all time in the final days of racial segregation.

“Elvis took white-man and black-man music and put it together,” he said. “Many people didn’t like that at first .?.?. but he pushed those barriers. He didn’t see color. He saw people, and people appreciated that.”