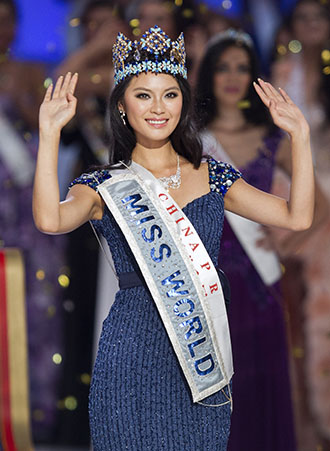 Miss China won the coveted title of Miss World on Saturday on home soil during a glitzy final held in a mining city on the edge of the Gobi desert.

The mostly Chinese audience erupted in cheers, and fireworks lit up the sky, when it was announced that the home candidate, Yu Wenxia, had been awarded the coveted title.

“When I was young I felt very lucky because so many people helped me, and I hope in the future I can help more children to feel lucky,” Yu, a 23-year-old aspiring music teacher said when asked why she should be crowned.

Yu, who became China’s second Miss World winner, appeared on stage in a dazzling array of ball gowns during the two-hour final and serenaded the audience with a piercing rendition of a popular Chinese song.

Last year’s Miss World, Ivian Sarcos of Venezuela, handed over her crown to Yu, who wore a sparkling blue dress, in the futuristic Dongsheng Stadium in the northeastern city of Ordos.

Miss Mexico, Mariana Reynoso, had been the bookmakers’ favorite for the title, but failed to make the last seven candidates despite a strong showing in the early rounds of the pageant. Miss Wales, Sophie Moulds, came in second, while Miss Australia, Jessica Kahawaty, finished third.

The final, watched by a worldwide TV audience of an estimated one billion viewers, included a nod to the culture of Inner Mongolia, with a performance by a group of Mongolian musicians playing the erhu, a traditional two-stringed instrument.

Ordos, which in about 700 kilometers (440 miles) from the nearest beach, was an unlikely setting for the world’s biggest beauty pageant.

The city has grown rich over the past decade on the back of a coal mining boom that has transformed it from a sandstorm-afflicted backwater into one of the wealthiest places in China. AFP