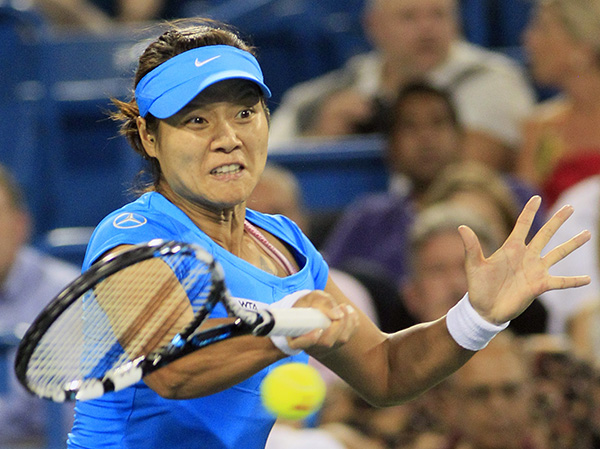 China’s Li Na took advantage of an ailing Venus Williams to advance to the finals of the Westerm & Southern Open. It will be her fourth finals appearance of the season. [AP/YONHAP]


MASON, Ohio - No medal involved this time. Little drama, either. Novak Djokovic simply ground his way to another title shot.

And Roger Federer will be waiting for him.Djokovic reached the finals of the Western & Southern Open for the second straight year Saturday, beating Juan Martin del Potro 6-3, 6-2 in a reprise of their meeting in the Olympics. Del Potro defeated Djokovic for the bronze medal on Wimbledon’s lush grass two weeks ago.

The sequel on a hard court? Not even close. The final bout will match the world’s top two players, the first time that’s happened in Cincinnati. If Federer wins, it’ll give him a record five titles in the tournament.

“It’s a nice bonus, really,’’ Federer said. “When I was a kid I wasn’t thinking of winning five Cincinnatis, but then again here I am in this great situation being able to do it, the first man ever. So I’m obviously excited.’’

Top-ranked Federer beat Swiss countryman Stanislas Wawrinka 7-6 (4), 6-3 in the other semifinal match. It’ll be the seventh time that Federer and Djokovic have played for a tournament title, the last time in 2011 at Dubai. Federer beat Djokovic for the Cincinnati title in 2009.

“I hope I’m fresher than him tomorrow,’’ Federer said. “We’ll see how it goes.’’

Djokovic also reached the Cincinnati finals last year but had to quit in the second set because of a sore shoulder, giving the title to Andy Murray.

This week is going much better for him. He won the Rogers Cup in Toronto last Sunday night, leaving him a little tired, but he managed to get some rest at the suburban Cincinnati tournament. He was on court for only a half-hour Thursday night when Nikolay Davydenko quit because of a sore shoulder.

In women’s events, Venus Williams’ reinvigorating week ended with a bad back and gritty comeback that wasn’t quite enough. Williams played through back pain that forced her to get treatment and reduced her second serve to 63 miles per hour by the third set. China’s Li Na took advantage, reaching the Western & Southern Open finals Saturday night.

All week, Williams showed she’s learned how to cope with an immune system disease that causes fatigue and sore joints. She made it through three grueling, three-set matches to get to the semis. “I pretty much couldn’t serve,’’ she said, “But I wanted to try, especially since this is my first semifinal of the year.”

Li will be seeking her first title this season after losing in the finals at Sydney and Rome.

She will face the winner of the other semi-final bout between Germany’s Angelique Kerber and Czech Petra Kvitova, who beat her last week for the Rogers Cup in Montreal. AP