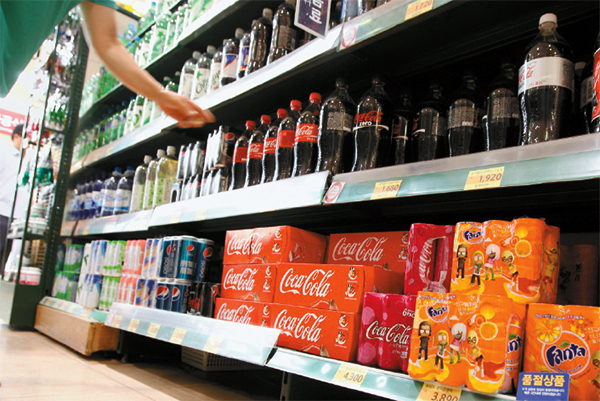 The price of many carbonated drinks at large discount stores rose sharply on Friday. Hatai Beverage bumped up the prices of its 44 products, including its popular Sunny 10, by between 2 and 15 percent since Thursday, and Coca-Cola Korea made its 41 products, including Coca Cola and Fanta, 5 to 9 percent more expensive as of Friday.[YONHAP]


The Consumer Price Index may rise this month as beverage companies have been recently raising their drinks price. A rise in the cost of crude oil is also pushing up local oil prices.

Local beers will also tap more of shoppers’ income as Oriental Brewery, or OB, is adding 5.89 percent to the factory prices of all its beers from today.

The company introduced a price freeze last year, despite initially planning to raise them by 9 percent, in light of the government’s efforts to stabilize consumer prices. The move, the first increase the company has made since October 2009, will see a 500-milliliter bottle of Cass climb from 1,081 won ($0.95) to around 1,140 won.

Korea’s favorite distilled liquor soju is also expected to go up as the price of its major ingredient, ethanol, rose 5.6 percent on Friday after remaining unchanged for four years.

“When the price of ethanol went up in 2008, [soju products] also rose,” said an industry source, adding that manufacturers of the vodka-like beverage will soon propose a price rise, possibly also citing more expensive logistics costs.

Coca-Cola Korea also raised the prices of its 41 products, including carbonated drinks, by up to 9 percent Friday. It last revision, by the same amount, fell in November. This will see average prices rise by 50 to 100 won, depending on the retailer. A 500-milliliter bottle of Coca-Cola is now 7.7 percent pricier.

“Although the hikes seem to be happening frequently, another rise was inevitable as the [previous] price did not cover rising manufacturing costs,” said an employee at the company.

Haitai Beverage also raised its drinks prices by up to 15 percent on Friday, including its major drink Sunny 10.

The price of coffee at franchise stores is also set to join the trend. A Twosome Place, operated by CJ Foodville, said Thursday that it is set to raise the prices of 23 coffee beverages by 5.9 percent. Another 38 drinks, including teas, stay unchanged.

The company said it is moving to minimize the burden on its franchise stores as rent, labor and ingredients keep going up.

Meanwhile, the price of oil at the pumps is shooting up as Dubai crude jumped to $111.03 per barrel on Friday, compared with $93.72 July 2. The average price of gasoline nationwide here hit 1,973.95 won per liter Friday, 176 won more than last month’s average, according to Korea National Oil Corporation. In Seoul, it reached 2064.42 won at the end of last month, up 100 won on-month.

“The rising global price of oil came amid expectations that economic conditions in the U.S. will improve, while Europe may get economic stimulus package,” said an employee at the Korea National Oil Corporation.