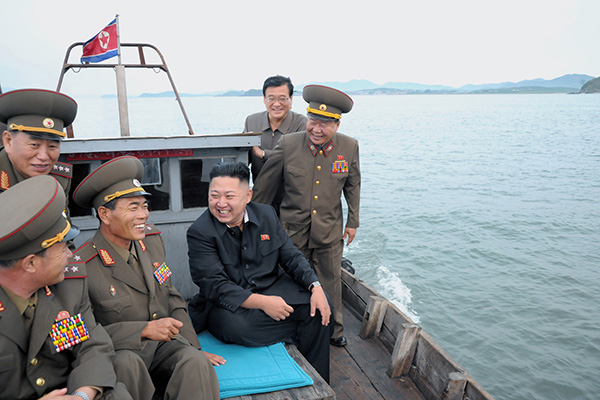 
North Korean leader Kim Jong-un inspected a frontline artillery unit near the tense western sea border on Saturday, extolling service members as heroes and telling them “to be vigilant against every move of the enemy,” the North’s state media reported over the weekend.

Kim’s appearance at the unit on Mudo, or Mu islet, came two days before the planned launch of Ulchi Freedom Guardian, annual joint exercises by South Korea and the United States. The exercises are set to start today and continue until Aug. 31 and they involve some 56,000 South Korean troops and 30,000 U.S. soldiers.

“If the enemy dares to recklessly pre-empt firing and even a single shell drops on the territory of the Democratic People’s Republic of Korea [North Korea’s official moniker], the Korean People’s Army [KPA] should lead the battle to a sacred war for national reunification, not confining it to a local war on the southwest region,” the young leader was quoted as saying by the North’s Korean Central News Agency (KCNA). “He also ordered it to turn the west sea into a graveyard of the invaders,” the KCNA said.

According to footage from Pyongyang’s Korean Central Television and KCNA, Kim reached the western sea border on an unarmed, small wooden boat accompanied by a dozen officials including Choe Ryong-hae, director of the KPA’s General Political Bureau, and Kim Yong-chol, director of the Reconnaissance General Bureau. Hyon Yong-chol, who was promoted to vice marshal last month, was not shown in the footage. Earlier in the day, Kim also inspected a defense detachment on the nearby island of Jangjae.

Analysts in Seoul said Kim’s decision to reach the unit in a small, wooden boat could have made for both political and security purposes. Kim may have been attempting to show his courage to his own military and the public while at the same time avoiding South Korea’s radar surveillance, analysts said.

According to its English-language dispatch, the leader also “ordered the service persons of the detachment to be vigilant against every move of the enemy.” Kim gave service members pairs of binoculars, automatic rifles and machine guns as gifts.

“The purpose of Kim’s visit could be aimed at tightening his grip over the military by demonstrating courage as a leader by visiting the dangerous far frontline,” said Chang Yong-seok, a senior researcher at the Seoul National University’s Institute for Peace and Unification Studies.