Lee mulls how to react to Noda’s Dokdo missive

Lee mulls how to react to Noda’s Dokdo missive 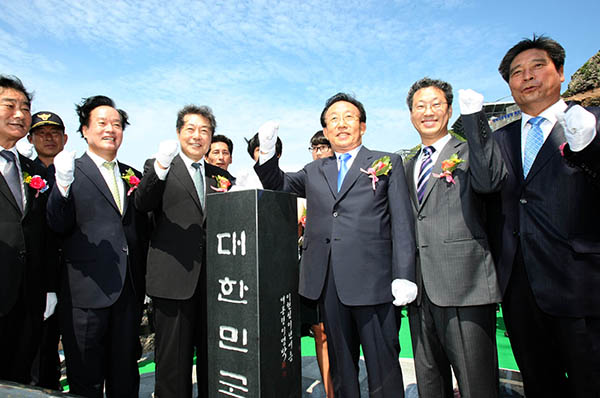 A monument marking Korea’s sovereignty over Dokdo is installed yesterday with a ceremony attended by Public Administration and Security Minister Maeng Hyung-kyu, second from left. It is inscribed in Korean with “Dokdo” on the front and “Republic of Korea” on the back. On the side, it commemorates President Lee Myung-bak’s visit this month.[YONHAP]


The Korean government is studying different options on how it will respond to the letter sent by Japan’s Prime Minister Yoshihiko Noda to President Lee Myung-bak last week, a senior government official said yesterday.

“We will review all legal merits and, based on that, should make a state decision,” the official said.

On Friday, Japanese media reported that Prime Minister Noda sent a letter to Lee via Seoul’s Embassy in Tokyo describing Lee’s visit to Dokdo on Aug. 10 as “regrettable.” The Blue House later confirmed that the embassy received the letter but did not elaborate on what was written in the letter in line with diplomatic practice. Some officials expressed displeasure about Japan disclosing the message in the letter to the press before it was delivered to Korea as it violates diplomatic protocol.

The options Korea is reportedly considering include sending back the letter, refuting it or simply ignoring it. Whatever option Korea chooses, another official said, “There will be no change in Korea’s position on the Dokdo issue.”

The dispute between Korea and Japan over the Dokdo islets has reached a boiling point after Lee made an unprecedented visit to the island on Aug. 10. Strongly protesting Lee’s trip, Japan officially proposed that Korea take the territorial issue to the International Court of Justice (ICJ). Korea’s Foreign Ministry, however, flatly rejected the proposal saying that it isn’t “worth any attention” because “Dokdo is clearly part of Korean territory historically, geographically and under international law and no territorial dispute exists.”

Korea has been effectively controlling the two rocky islets located 87.4 kilometers (54 miles) southeast of Ulleung Island by placing a police presence there and designating the islets as a natural monument. A Korean couple also lives on the island.

Yesterday, the provincial government of North Gyeongsang, which has Dokdo under its jurisdiction, also installed a 1.2-meter-tall stone monument in front of a building where police officers are stationed to guard the islets. The monument is inscribed in Korean with “Dokdo” on the front and “Republic of Korea” on the back.

A JoongAng Ilbo poll showed yesterday that Lee’s approval rating jumped 9 percentage points to 34.7 percent after his visit to the islets. In July, the ratings were on a downward trend from 29.4 percent to 26.4 percent.