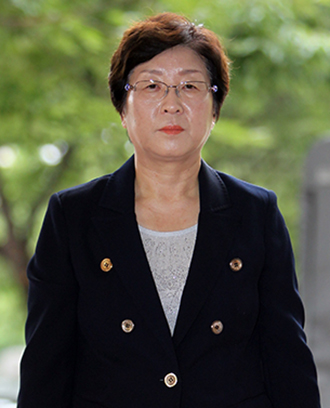 
A day after a former nomination committee member Hyun Ki-hwan was expelled by the conservative ruling Saenuri Party for his involvement in a money-for-nomination scandal, Representative Hyun Young-hee, the suspected briber, was expelled.

The first-term lawmaker Hyun Young-hee is accused of paying 300 million won ($264,600) to the former nomination committee member in return for a privileged seat based on the system of proportional representation during the legislative elections in April.?

As the two Hyuns have been kicked out due to the scandal, the public’s focus is now on whether Park Geun-hye, the presidential front-runner of the ruling party, would make a public apology.

Park was the emergency chairwoman of the conservative ruling party when the nominations were made before the April legislative elections and Hyun Ki-hwan was the deputy head of the party’s think tank Yeouido Institute and a Park loyalist.

“I’m waiting for the results of the prosecution’s investigation into the scandal,” Park Geun-hye told a reporter after receiving questions about her intentions to make a public apology, implying that she will consider offering an apology in accordance with the investigation result. “But I am very sorry to have worried the nation and party members with the scandal.”

Hong Il-pyo, spokesman of the ruling party, said in a press briefing held at the National Assembly in Yeouido, western Seoul that 120 of 149 Saenuri sitting lawmakers attended the voting yesterday and unanimously approved the expulsion of Hyun Young-hee.

Kang Yong-seok, 42, was kicked out for defaming an entire profession when he told a group of student anchorwomen that they should provide sexual favors to advance in their careers in 2010. Hyun, however, will retain her seat as an independent.

After the expulsion of Hyun Young-hee, the number of parliamentary seats for the ruling party at the National Assembly went down to 148.

The party gained 152 seats out of 300 in the April 11 election, but lost two of them shortly after. Kim Hyung-tae, a representative-elect, quit the party after being accused of embezzlement and attempting to rape his widowed sister-in-law a decade ago, and Moon Dae-sung, the Olympic gold medalist and representative elect from Busan who was accused of plagiarizing his doctoral thesis in 2007 quit the party in mid-April. The party lost another seat as Kang Chang-hee left after being appointed the National Assembly speaker.

Before the voting, Hyun Young-hee was re-summoned by the Busan District Prosecutors’ Office at 10 a.m., and was questioned over her allegations.

Sources in the prosecution confirmed with the JoongAng Ilbo that they have secured audio records of a conversation between Hyun and her former aide Jong Dong-geun, the whistleblower of the case.