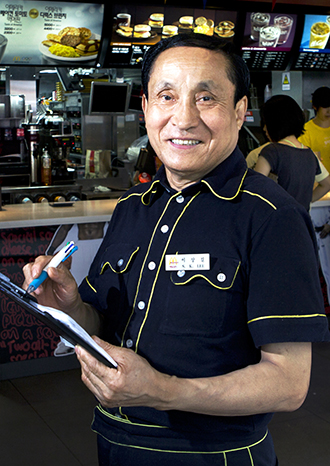 Lee Sang-kil, a 66-year-old maintenance worker for seven years at the Namyangju branch of McDonald’s, says working with young people is the most satisfying aspect of his job. By Park Sang-moon

“This is the second chapter of my life, and I’m absolutely enjoying it,” said Lee Sang-kil, 66, a janitor for seven years at the Namyangju, Gyeonggi, branch of McDonald’s.
Lee, a former civil worker for over 30 years at a train station in Daegu, seemed to be fully enjoying being in charge of the store’s overall condition eight hours a day, which involves sweeping and mopping the floors, when the Korea JoongAng Daily visited him on July 24.
But beginning a second career wasn’t without its difficulties.

“The first three months of working here were the most difficult part of my tenure here,” Lee said. “I worked as a public officer in charge of a train station in Daegu with more than 20 juniors under my command. I hired and managed a work force for maintenance tasks at the station, and here I find myself cleaning restrooms.”

“But after the initial three months, I began to enjoy my job here and soon found out getting to know and work with young people were most satisfying.”

Kim Jin-ah, the branch manager, noted she had expected difficulties from overseeing an employee more than 30 years her senior.

“I really had no clue how I should address him at first, but now I call him abeunim, the Korean formal expression of father, and I really feel that way,” said the manager.

“One thing I have noticed from working with him is that he acts in a way that’s much more responsible than young part-time workers. I have never seen him come in late in seven years.”

Lee Sang-oak is another senior worker at the Hanti branch of Pizza Hut in southern Seoul. The 61-year-old, who formerly ran an interior design business, told the English daily about his fledgling eight-month-old career at the restaurant.

“At first, I felt a little awkward working with and sometimes following orders from much younger workers here,” he said. Lee, whose job includes managing a salad bar and assisting in the kitchen, said it was this sense of belonging that makes him feel encouraged every day.

“I even felt a sense of accomplishment when complimented by a manager that I was good at making dough.”
As Korea is entering an “aging society” with an average life expectancy rate in 2010 of 80.7, 77.2 for males and 84.1 for females, those in their 60s who are retired are becoming more than just a “minority” in Korean society.

Now at 11 percent, those in their mid-60s and over are expected to make up 20 percent of the population by 2026, according to Statistics Korea. And the country is increasingly grappling with problems related to the aging process.

According to the Organization for Economic Cooperation and Development, Korea’s relative poverty rate among the elderly over 65 is the highest among the 34 OECD members at 45.1 percent, more than three times the average rate of 13.5 percent.

The poverty rate is defined by the percentage of people living on less than half of the median household income. Japan, another rapidly aging country, has a much lower rate of 22 percent of their elderly living in relative poverty.

The OECD attributes Korea’s high poverty rate among the elderly primarily to the belatedly implemented public pension plan first introduced in 1988, leaving retirees in the mid-2000s with “little or no support,” in its report “Old-Age Income Poverty” published last year.

In an effort to control problems related to the aging society, the government came up with an idea: make the case of the two Mr. Lees more common among people in their age group. The Ministry of Health and Welfare launched the senior internship program last year with 1,200 private firms, such as McDonald’s and Pizza Hut, participating.

The program aims to provide job opportunities for the elderly as well as providing participating companies with the funds for up to 50 percent of monthly salaries for senior workers for the first three months of employment.

The ministry reported a total of 3,000 jobs were produced under the program with an average monthly payment of 640,000 won ($565) last year.

Many seniors are welcoming the move by the government to foster job opportunities in joint efforts with corporations.

“My friends and I used to joke about how boring it would be if we live until we’re 100 without jobs,” said Lee Hyo-il, 67, who participated in an internship program as a maintenance worker at a Suseo apartment complex, southern Seoul, employed by the Korea Land and Housing Corporation, the country’s major housing service provider.

Lee was one of the 2,000 older men who landed their jobs through the internship program.

When the country’s mega retailer Lotte Mart recruited senior workers in February, more than 2,500 applied for 400 cashier positions. The retail company said 70 applicants, of the 2,500 applied, were master’s or doctoral degree holders.

“The government sponsorship for the companies participating in the program by providing financial aid is another selling point to follow suit.”

Corporations are also under the impression that older workers do bring benefits to the corporation besides enhancing their public image.

“From their experience in society, senior workers tend to be more responsible and accountable in fulfilling their jobs,” said Karen Kim, communications director at McDonald’s Korea.

“We are now operating around 120 senior crews at stores as maintenance workers and planning to continue the program,” the director told the Korea JoongAng Daily.

The employment program for the silver generation, however, still has many challenges.

Most jobs offered to older people are in the service industry and the wages are not high. Lee, the janitor at McDonald’s, makes 4,640 won per hour.

“Older employees who work as cashiers and cleaning staff are really careful not to reveal their jobs to people they know, not to mention they have declined to be interviewed,” said a Lotte Mart public relations official.

“There is this notion that working in the service sector is something of an unglamorous or embarrassing career that is generally shared by the elderly,” Yang of the labor institute said.

“Since most jobs offered to the senior generation come from the service industry, public sentiment should be more open and friendly toward the elderly working in the service sector.”

“A lot of my friends at first were puzzled when I told them I was working at a fast-food chain after more than 30 years in public service,” said the 66-year-old McDonald’s employee Lee. “Losing face is nothing compared to the new experiences to be gained from meeting and working with people every day.”