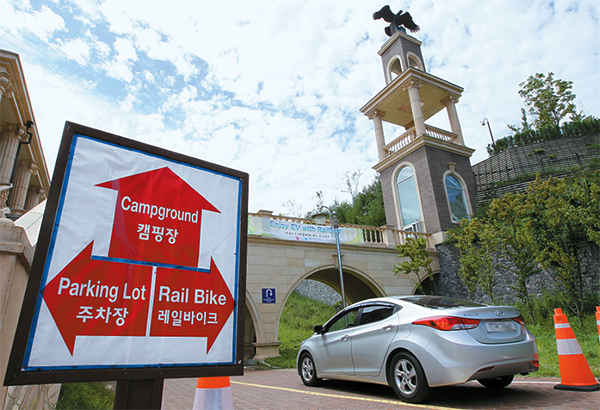 An English Village in Paju, Gyeonggi, on a Monday, struggles to attract students and now loans out a portion of its camping site to generate money. There are over 30 English villages across the nation. Once touted as a cheap English language immersion experience as an alternative to hagwon or studying abroad, the villages are currently struggling to make ends meet and are forced to find alternative sources of revenue. By Kim Do-hoon

But enthusiasm for these English villages has fizzled over the past several years and many are struggling to stay afloat.

On Aug. 6 in Paju, Gyeonggi, a 35-year-old father surnamed Kim brought his two kindergarten children with him to the English village there for a camping program.

He was greeted by a huge sign written in Korean stating: “Welcome to the Auto Camping site.”

Kim said, “It’s close to Seoul, so I brought my kids to learn English and thought they could also enjoy the scenery.”

He walked 300 meters (984 feet) into the site with his children where a dozen tents were set up. Families were cooking, playing badminton or resting in the shade. No one was speaking English. There were no instructors enforcing English usage either.

Last summer, the organizers of the English village rented out a parking lot as a camping site that can accommodate 77 tents. Most of the site was used for a camping program.

The first English village was established in 2004 in Ansan, Gyeonggi, by provincial Gov. Son Hak-gyu. There are currently 32 English villages across the nation.

In 2008, there were 21 English villages and 430,000 people enrolled in programs. Even back then there were concerns that the market was too saturated, but 11 more were built. Last year, enrollment dropped to 300,000, according to the Ministry of Education, Science and Technology.

The Gyeonggi English Village Paju Camp was built on 270,000 square meters (66 acres), the largest in the country. It was established in 2006 and cost Gyeonggi some 100 billion won ($88 million) - funded by taxpayers.

The first year, 510,000 children enrolled at the Paju Camp, but every year since then the number has dwindled. Last year, there were 21,538 at the camp.

The Paju English village is now operating at a deficit of 11.1 billion won.

Yim Jeong-suk, 44, has sent his kids to the program for the past four years. “Every year, there is a visible decrease in students, so it’s quite a pity. With the installation of the external camping site, the atmosphere is quite distracting and a concern.”

Two high schoolers also wandered around the Paju site that day. “The Gyeonggi provincial government sent us for a free one-day experience, but there were no specific educational programs so we are just wondering around the village.”

Many English villages were originally run by local governments and boasted cheaper fees where people could learn English from native speakers.

Representative Yoon Eun-suk of the Gyeonggi Provincial Council said, “There were divergent opinions when the Paju Camp was approved about providing leisure business in 2010, but in the end we decided to do so in order to escape from financial problems.”

Other English villages offer a variety of lectures, workshops and classes to generate funds, no longer in line with their original “English language and cultural immersion” motto. Some offer SAT classes and other college preparatory classes.

The Seoul Metropolitan Government invested 12.1 billion won to build the Seoul English Village Pungnap Camp which is currently gearing its programs toward college students preparing for job applications and interviews.

The five-day program costs 300,000 won and is conducted in Korean.

But administrators at Pungnap state, “In order to make up for the deficit, there is no choice but to increase revenue through job application classes and other such programs.”

Another English village in Yangpyeong, Gyeonggi, is under police investigation for charges of violating private educational institute laws after it partnered with a Gangnam-based English language academy and offered eight-week SAT classes for 15 million won.

Another English camp in Osan, Gyeonggi, closed down recently in June due to mismanagement. Established in 2009, the camp cost the province 5 billion won to build.

“I can send my child to have an English-speaking experience in a Southeast Asian country for 2 million won, the cost of a four-week program at the English village, so it’s not cheaper at all,” said a 44-year-old mother, Kwon Hee-jeong. “Who will send their kids to a English village? For the same cost, it’s better to send the child abroad or to a hagwon.”