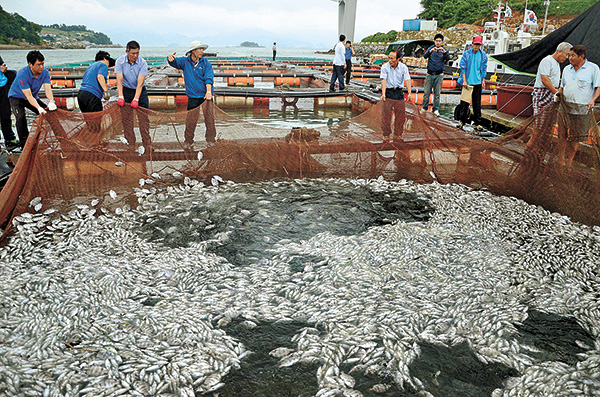 Red tides in the southern waters off Yeosu, South Jeolla, killed a large number of fish on Aug. 13 and the National Fisheries Research and Development Institute upgraded a red-tide attention to an alert over the weekend. [YONHAP]


A fish farm once filled with 18,000 sea breams in a 5,000-square-meter (1.2-acre) facility now stands empty, as a red-tide outbreak in coastal waters off Yeosu, South Jeolla, killed all the fish on Aug. 13.

The effects of red tide are increasingly spreading along the southern coast, killing about 800,000 fish this year.

The National Fisheries Research and Development Institute upgraded the warning level to an alert from an attention Saturday evening on red tides off Tongyeong, South Gyeongsang, as red algal blooms in the areas have deepened, raising concerns that a repeat of the red-tide nightmare of 2003, which resulted in 21.5 billion won ($18.9 million) in losses, could take place again.

Making the matter worse is the fact that the exact cause of the phenomenon that causes the air-suffocating algae has not been determined, although there have been many studies done by experts.

“Studies have been done on the red tide since the case was first reported in 1995, but we still have not clarified the exact cause,” said Lee In-gon, a fisheries official at the South Jeolla Provincial Government.

The cause of this year’s massive outbreak of algal blooms is not clearly known either.

Some experts cite the sweltering heat this summer that led to a rise in seawater temperatures as what caused the red tide.

“This year’s seawater temperatures during the summer turned out to be about 3 degrees Celsius [37.4 Fahrenheit] higher than last year’s over the same period,” said Lim Weol-ae, a Ph.D. researcher at the state-run fisheries institute.

But some argue the temperature of seawater is not the sole cause of red tide.

“Though it is true that seawater temperatures are higher this year, the density of nutrients that prompts the red tides is actually lower than the average level,” said Lee In-tae, director at the Research Institute of Costal Environment and Fishery Policy.

The possibility that a massive influx of water filled with nutrients from China’s Yangtze River is responsible for the strong red tide has also been raised.

Chinese authorities released outflows of water from its Three Gorges Dam that spans the Yangtze River in Hubei Province as part of efforts to relieve flooding damage in July.

“It might be possible that the sudden spread of nutrients flowing into the sea from the massive amount of waters discharged from dams last week is linked to the enlarged extent of the red tides this year,” Lee said.

Fishermen had once insisted the algal blooms in the southern coast were due to leaking crude oil from an oil tanker that sunk in coastal waters off Yeosu, South Jeolla, in 1995.

The claim, however, proved false as the red tide appeared this year, four years after it was found that emulsifying agents from the spilled oil were all dissolved in 2009.

Another aspect complicating this year’s red tide is its initial outbreak location.

Prior to this year, it had always been seawaters off South Jeolla where such case was first detected. It was, however, southern coastal waters off South Gyeongsang this year where toxic red blooms were first found.

Also, heavily affected areas this year were previously regarded as “safe zones” because of their location between mainland and islands.

The fish farm that lost 18,000 fish on Monday is in that so-called safe zone but could not prevent the toxic blooms.

Other than dumping red clay and running oxygen concentrators, there are no viable measures to remove the algae.

In a bid to study the mysterious nature surrounding the red tide, the South Jeolla Provincial Government requested the Ministry of Food, Agriculture, Forestry and Fisheries to fund 20 billion won to build a National Hazardous Organism Center.