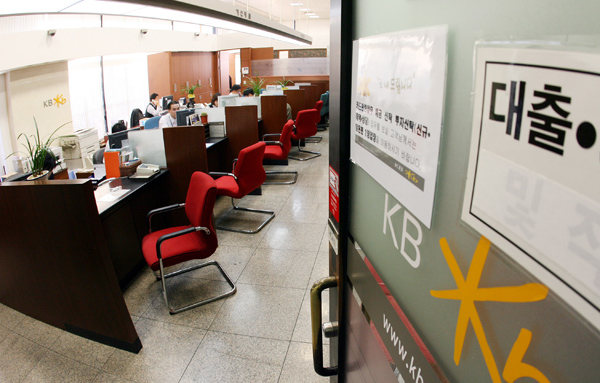 The profitability of banks is souring amid growing negative public sentiment and government pressure to keep a lid on new lending.

According to the Financial Supervisory Service (FSS), the figure for commercial banks between April and June was 1.6 trillion won ($1.41 billion).

This is 61 percent lower than the net profit recorded in Q2 last year. Quarter-on-quarter, it fell 1 trillion won from the first three months of 2012.

This decline largely stemmed from the narrowing loan-to-deposit rate discrepancy as banks have been cutting back their interest rates on loans in the face of worsening public sentiment. The difference between the two rates forms a major income source for local commercial banks.

According to the FSS, the gap in the second quarter stood at 2.85 percentage points, down from 2.9 percent in the first three months of this year.

One of the main contributors has been negative public feeling about the financial industry, which has pressured banks into lowering their interest rates on loans.

In recent months, banks have been dealt a heavy blow by the public over their alleged collusion on certificate of deposit (CD) rates, which are used to form a range of rates, and their mishandling of loan contracts, such as forging customers’ signatures. 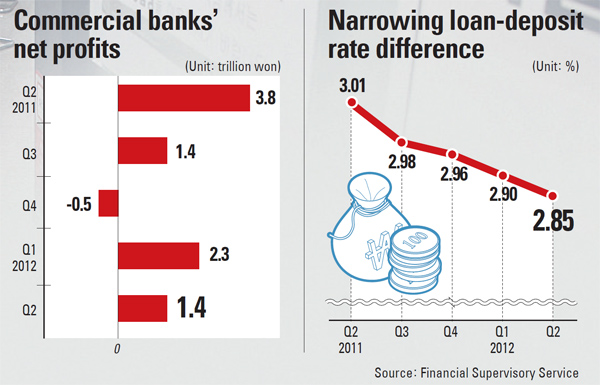 The banks were accused of manipulating the system to profit from greater loan interest despite the central bank’s decision to adopt a loose monetary policy.

To recover their lost credibility, banks have been rushing to lower their interest rates on household loans by between 2 and 3 percentage points.

Additionally, the government has been pressuring them to tighten their lending, thus eating into one of their pillar profit sources.

The government’s fear that ever-inflating household debt could pave the way for insolvency on a grand scale has pressured banks to refrain from authorizing many additional, or secondary, loans.

As a result, household debt grew 695.3 billion won in July from the previous month. This is a sharp drop from the 1.3 trillion won monthly increase recorded in June.

“As the economy remains in a state of uncertainty, it seems as though even those who have the ability to take out loans are refraining from doing so and are tightening their spending,” said one employee at a local bank.

Banks are likely to keep struggling this year as the gap in rates is forecast to narrow further as the market believes the central bank will make cut the benchmark borrowing rate.

As the economic situation remains bleak both at home and abroad, the banking industry is also becoming more conservative in hiring new recruits.

Woori Bank is expected to hire around 200 new employees in the second half, matching those already newly recruited this year. However, this would still fall short of its initial target of expanding its work force by 550 in 2012.

Shinhan Bank, which also fattened up its work force by 200 people in H1, is expected to similarly likely to scale back recruitment in the remaining months of the year.

KB Kookmin Bank and Korea Exchange Bank are expected to recruit around roughly 100 new employees each before the turn of the year.