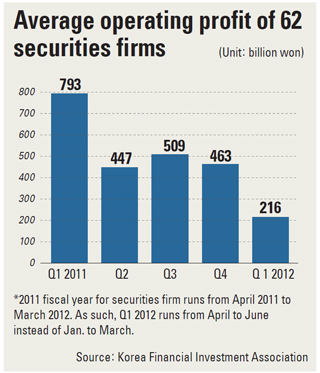 The number of domestic branches run by local securities firms fell by 55 to 1,744 on-year in June as they scramble to make up for snowballing losses after being hit by the protracted economic downturn, data from the Korea Financial Investment Association showed yesterday.

Market observers gave three reasons for the downsizing: the adoption of belt-tightening policies to stay afloat amid the global recession; a growing trend among the public to buy and sell stocks themselves online and via their smartphones; and waning interest in stock trading due to volatile market conditions.

According to figures by the Korea Financial Investment Association, 62 securities firms in Korea - comprising 42 domestic firms and 20 foreign players - posted an average operating profit of 216.3 billion won ($190.4 million) from April to June, their fiscal first quarter. This represented a drop of 72.7 percent down from the 793 billion won posted in the corresponding period last year.

Of those, over one-third, or 21 firms, posted an operating loss.

Recovering from the 2008 global financial crisis caused by U.S. subprime mortgages, they gradually expanded their branches here until March 2011, when the total number hit 1,820 branches, before introducing cutbacks.

Tongyang Securities, which saw a net loss of 50 billion won as of June, closed the highest number of branches - shuttering 37 of 165, or 22.4 percent - from March 2011 to June 2012. Mirae Asset was next, closing down 19, while KDB Daewoo Securities and Korea Investment and Securities each closed three.

“When brokerages need to reduce costs, they put the top priority on cutting manpower,” said an analyst surnamed Park at a local securities firm. “Closing branches is quite common.”

The number of employees at Korea-based brokerage firms stood at 42,081 as of June, showing a reduction of 601 from last December.

Another analyst gave a grim outlook for the industry.

“This slashing of branches was more or less inevitable given the public’s increased reliance on, and the availability of, HTS and MTS,” said an analyst surnamed Moon. “There is slim chance of brokerages adding more offices, even after the economy recovers, as more people will opt to trade stocks on their own.”