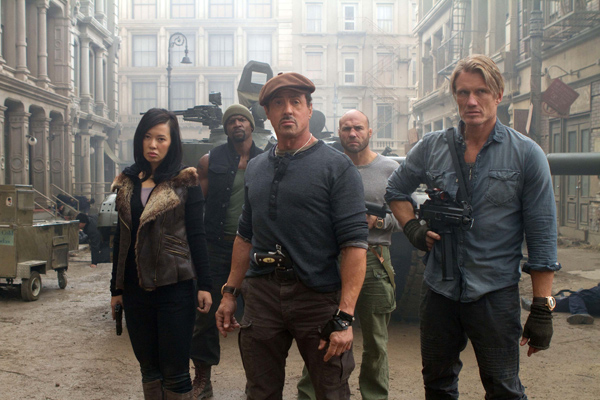 LOS ANGELES - All-star action romp “The Expendables 2” opened on top at the North American box office this week, pushing another sequel, “The Bourne Legacy,” off the summit, estimates showed Sunday.

The Sylvester Stallone thriller, which also features Jason Stratham and Jet Li as part of a team of mercenaries, raked in $28.8 million during its first Friday through Sunday run, according to movie tracker Exhibitor Relations. “The Bourne Legacy” - starring Jeremy Renner as a secret agent threatened by his employers in a spinoff of the popular series of films that starred Matt Damon as Jason Bourne - took in $17 million.

That kept it ahead of another new release, “ParaNorman,” an animated movie about a boy who can speak with the dead, set to earn $14 million in ticket sales.

Political spoof “The Campaign,” starring Will Ferrell and Zach Galifianakis, fell to fourth place, with box office receipts of $13.4 million, while the Jordin Sparks-vehicle “Sparkle” - a Motown-style musical set in the 1960s - opened in fifth place, with $12 million.

“The Dark Knight Rises,” the latest Batman installment, slipped to sixth, earning $11.1 million, just barely ahead of quirky fantasy-comedy “The Odd Life of Timothy Green,” which was the final new release to make this week’s Top 10 ($10.9 million).

Meryl Streep and Tommy Lee Jones’s romantic comedy “Hope Springs,” about a married couple trying to get back their spark, was in eighth place ($9.1 million).

And rounding out the top 10, well behind the others, were teen comedy “Diary of a Wimpy Kid: Dog Days” ($3.9 million) and science-fiction action remake “Total Recall” ($3.5 million).