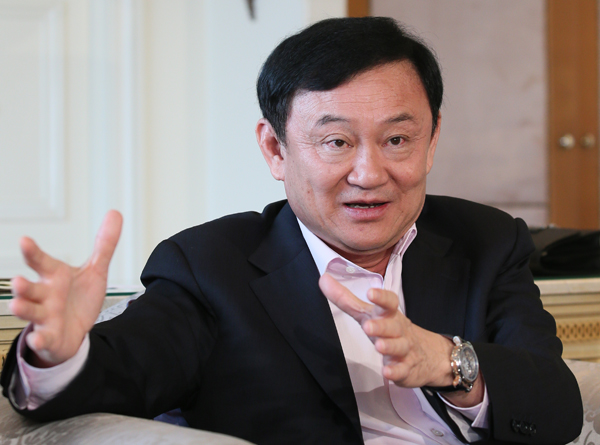 Thaksin Shinawatra in Seoul on Saturday. By Cho Yong-chul


The only place on earth where Thaksin Shinawatra‘s private jet cannot travel is the country where he served as prime minister. Or so he claims.

Thaksin, arguably the most controversial politician in Southeast Asia, was overthrown in a military coup in 2006 while he was on a visit to New York. He returned to Thailand for a corruption trial in February 2008, but fled in August. Later that year, he was sentenced to two years in prison for corruption.

Nevertheless, the 63-year-old telecom billionaire has support back home. His youngest sister, Yingluck Shinawatra, was made prime minister last in his stead. The clash between pro-Thaksin “Red Shirts” and anti-Thaksin “Yellow Shirts” forces still divides the country.

Based mostly in Dubai and globetrotting extensively, Thaksin spent last weekend in Seoul at a posh hotel meeting friends and business partners. He sat down for an exclusive interview with the JoongAng Ilbo and JTBC on Saturday.

Q. So it’s your seventh year in exile.

A. The first year was really bad, but from the second, I started to adapt myself, and now, I am pretty relaxed. I’m even thankful for the opportunity to learn more about the world. But I miss my family and home, and I want to sleep on my own bed. So there’s good and bad. I sometime say now I am based up in the air, as I go everywhere. Recently, I visited the United States and met Henry Kissinger for a talk on U.S. Asian policy.

This marks your third visit to Seoul within a year.

I want to learn more about Korea, especially about the four-rivers restoration project, which interests me because of its similarity to my water management plan during my premiership. Several countries including Korea and China are interested in winning the bid for the construction project in Thailand. The Chinese have very deep pockets, so I think the price competition would be one thing that Korean companies need to take into consideration.

Don’t you owe your political success to populist policies?

If you don’t look at the whole picture, you might think that I’m a populist. I was very generous to allocate budget to spur the economy from the bottom up. I did that not because I was employing a populist policy. Capitalism is good but not a cure-all. It’s not a strict choice between growth or welfare. You need to juggle both in an administration. If you give people opportunities and hope, you naturally become popular. That‘s why they want me back.

Still your policies sound populist, such as the 30 baht (95 cents) medical care.

Providing opportunities for the poor is like invigorating your body. To be strong, you need to invigorate the dying cells. That was what I tried to do. But one day, the military coup took away everything, and people chose to rise against it. When people were hungry, democracy was only for the elite. But now, people have filled their stomachs. And they want more. But the elite don’t want change that will affect their already happy lives.

I am a political victim here, because the elite saw that I’m the one who pushed for democracy. I represent the working class people from rural area.

And you are strongly associated with corruption allegations.

That’s a very popular allegation everywhere for an opposition to attack the other side, isn’t it? The court seized my assets, but they should have proceeded with the criminal charges first. They just took away the money first. There’s no right or wrong. I call this judicial overreach. The verdicts are against the rule of law.

Are you saying that the charges are fabricated?

Yes, I would. They are saying that I’m corrupt with my own money. Forbes once valued me at $2.2 billion. Now they took away all of my money and I have less than $1 million. I pursued a successful business career before joining politics because I didn’t want to be a burden to the family. My father was a member of the Parliament before my family was self-sufficient. When you see your family hungry, you are tempted to be corrupt.

Is it true that you talk to your sister, Prime Minister Yingluck Shinawatra, almost every day? Isn’t that the reason why she faces the criticism of being your puppet?

She’s like my daughter. When my mother passed away, she was only 18. My mother asked me to take care of her, so I gave her a good education and she started to work at my company. She worked hard and at 35, she was the CEO of the country’s biggest mobile company. She learned quickly. Now she runs a big party and needs my advice, but she is a very strong leader, who has knowledge, love for the people and a will to sacrifice. She knows what she’s doing. I always like to say that I am her encyclopedia that she can open anytime.

Your sister has proposed a controversial “national reconciliation bill” that would enable your return. Can it be a fast track back home?

The bill is to literally see reconciliation, as a remedy for the unfortunate past of hurtful feelings. We should bring both sides together. But the opposition worries too much about the next election. One day they would understand. Meanwhile, I can still be based up in the air.

What are your political aspirations?

I want to support my sister. I will have no ambition. But I forgave already. Mahatma Gandhi said, “Violence gives birth to a stronger violence.” When you are a leader, you learn to forgive. An iron fist strategy is playing the game of the opposition. It’s time for a velvet glove.