Battle for K-League comes down to 2 key games

Battle for K-League comes down to 2 key games 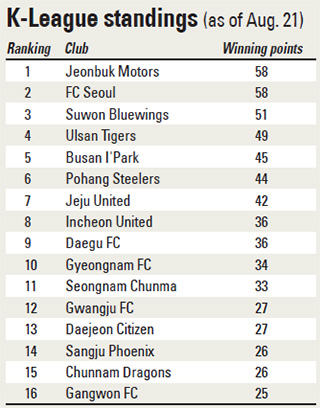 The battle for the title of the country’s best football club is almost at the midway point, with Jeonbuk Motors, FC Seoul and the Suwon Bluewings forming the top three after 28 out of 30 first-half games.

For the two remaining first-half matches this week, however, the focus will be on the teams stuck in the middle of the standings that are desperate to avoid being relegated to a lower-tier group.

The K-League introduced the two-tier split system for the first time this year and only the top eight teams in the first-half of the season will be given a chance to continue their quest for the championship trophy.

The eight bottom teams will be grouped separately and have to vie to avoid relegation into the lower league, a designation given to the two worst teams in the group at the end of the season.

Currently, Incheon United is in eighth place, but Daegu FC, ranked ninth, Gyeongnam FC, 10th, and Seongnam Chunma, 11th, all also have a shot at a top eight finish depending on the results of the next two games. One is to be held today or tomorrow and the other on Sunday.

Jeju United, ahead of Incheon by six points and 17 in goal difference, has secured a berth in the top-tier group.

Incheon got off to a slow start for the season, with its coach Huh Jung-moo resigning over a series of humiliating losses, but seasoned players Kim Nam-il and Seol Ki-hyeon, both members of the 2002 World Cup squad, have helped the team jump to eighth.

United won seven games in its recent nine games and is on a four-game winning streak. The team will play Jeonbuk Motors today and Jeju on Sunday.

Daegu is trailing Incheon only by goal difference, and it is aiming to go strong with Brazilian forward Matheus it brought in last month.

The two remaining games for the team are away matches, one in Gangwon today and the other in Seoul on Sunday.

Still, Gyeongnam coach Choi Jin-han was confident about a top eight finish in the first-half.

“We will win six points in the two games and see the rival teams lose,” he said.

One point behind Gyeongnam, Seongnam will be also able to finish eighth if they win both games and contenders Incheon, Daegu and Gyeongnam win only one.

Their chances are slimmer as they will face strong opponents in the two remaining games, Jeju and Suwon. Seongnam has not beat Jeju in the last six matches.

“I think the chance for us to remain in the upper-tier group is 30 percent,” said Shin Tae-yong, coach for Seongnam, the seven-time winner of the K-League.

“We will win both games and wait for heaven’s will.”

The second-half of the 2012 K-League season will be held between Sept. 15 and Dec. 2, during which each team will have 14 matches. The champion’s title will be given to the team in the upper-tier group who collects the most total wins. The top three teams in the upper-tier group will be also given berths in the Asian Football Confederation Champions League.