House moves drop to 1979 level in first half

House moves drop to 1979 level in first half 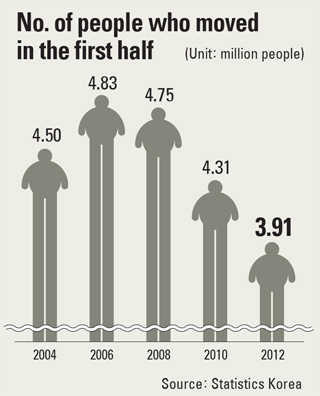 As though any confirmation were needed that the property market is in the doldrums, data released yesterday shows that the number of people moving house has fallen to the lowest level in 33 years.

According to figures by Statistics Korea, 3.91 million people moved to new housing in the first half of the year, the smallest number in this six-month period since 3.88 million packed up and changed addresses at the front end of 1979.

This marked the fourth straight year of declines since the U.S. subprime mortgage crisis sparked a global credit crunch.

In the April-June period, fewer than 1.8 million people found new homes. This is the lowest movement reported since the same quarter of 1975, when 1.55 people moved to new housing.

The state-run statistics agency calculates the number of movers based on change-of-address registrations at local ward offices, meaning the gauge includes those who relocate within the same neighborhood as well as from city to city, or, for example, from Busan to Paju in Gyeonggi near the inter-Korean Demilitarized Zone.

The property market traditionally sees more activity in the first half as Koreans prefer to move in spring to avoid the parching summer sun and the frozen climes of winter.

Autumn is usually the second-busiest period for realtors.

Another factor behind the popularity of these two seasons is that they lead into new school semesters, which gives parents time to settle their kids into new neighborhoods and help them switch schools more smoothly.

“There was less movement in the market, partly because the population is aging, and elderly people prefer to stay put,” said an official at Statistics Korea.

“The sluggish real estate market was also another major contributor,” said the official.

The market has suffered years of decline since the 2008 financial crisis battered the Korean Peninsula.

The latest flare-up in the euro zone dealt another severe blow to the market as negative indicators encouraged them to refrain from trading their property.

Many homeowners are already struggling to find the funds to repay their snowballing debt.

Just 231,000 apartments - the most popular form of residence in Korea - were traded in the first half, the lowest record since data was created in 2006.

Seoul saw the steepest drop than any other city, with just 20,000 contracts signed from January to June. This fell short of the 34,000 deals done over the same period last year, and less than half the 47,000 deals agreed-to in the first half of 2008.

According to a study by Kookmin Bank real estate prices, average apartment prices nationwide went up 13.5 percent in July compared to July 2008, before the global financial crisis came to light later that year.

Over the same period, apartment prices in Seoul fell 4.9 percent, while those in Gyeonggi slipped 6.4 percent.