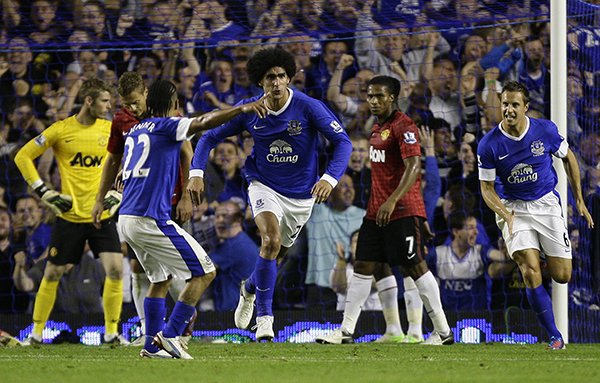 After losing the Premier League title to rival Manchester City on goal difference last May on the final day of a trophy-less season, United lost at Goodison Park for just the fourth time in 21 Premier League meetings.

“I don’t think anybody tonight was considering Everton at all,’’ Everton manager David Moyes told Sky Sports television. “A lot of people forgot Everton isn’t a bad team, and Goodison is a difficult place to come and win.’’

It was the first time United lost a league opener since 2004.

Robin Van Persie, signed from Arsenal on Friday, entered in the 68th minute in his United debut. American goalkeeper Tim Howard got the shutout for Everton, which was coming off a seventh-place finish.

Tom Cleverley came closest to tying the score, but his shot was cleared off the line by Phil Jagielka midway through the second half.

“It’s nice to send the Everton fans on the first day of our season home with a win and not the doom and gloom we normally start with,’’ said Jagielka.

United was playing its first competitive match since becoming listed on the New York Stock Exchange.

Also on Monday, George Soros Management Fund LLC made a filing with the U.S. Securities and Exchange Commission, saying it had bought 7.85 percent of Manchester United’s Class A shares.

The Glazer family controls the club through its ownership of Class B shares, which possess 10 times the voting power of the Class A stock.

In Berlin, halftime substitute Xherdan Shaqiri scored one goal and set up two more in his competitive debut, as Bayern Munich beat second division Jahn Regensburg 4-0 in the German Cup.

Mario Mandzukic opened the scoring in the 32nd minute, and Shaqiri doubled the lead with a free kick in the 60th.

The 20-year-old set up Mandzukic for the Croat’s second goal in the 80th and then assisted substitute Claudio Pizarro for the Peruvian’s first competitive goal in his return to the club.

Simon Terodde scored in the last minute of overtime to give Union Berlin a 1-0 win over fourth tier Rot-Weiss Essen. AP