Electricity bills next month to be shocking

Electricity bills next month to be shocking 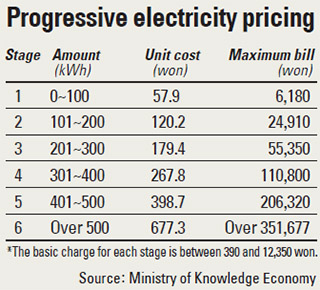 The record heat wave this summer will likely end up in jaw-dropping bills next month, adding more of a burden to debt-saddled households.

Moon Jung-yoon, a 28-year-old working mom living in Incheon, doesn’t even want to know how much she’ll have to pay for the juice her family used in the three weeks of intense heat in July and August.

“We had to keep our air-conditioner on for at least eight hours every day,” Moon said. “We used it for almost 10 hours during the Olympics, staying up until 5 a.m.”

And because of the country’s progressive power costing system, a little bit more electricity use can mean a far larger bill than usual. There are six ranges or “stages” of electricity use, and when a household goes from one stage to the next, the amount charged per power unit rises from 48 percent to 108 percent.

The stages are in increments of 100 kilowatt-hours. Translated into household terms, 100 kilowatt-hours is consumed by a 1.8 kilowatt air-conditioner (an average-sized split unit) that is used for two hours for 30 days.

However, complaints from the public about the system have risen through the years as Korean households use more and more power.

“There will be a number of households concerned about higher electricity bills during this summer, and complaints about the progressive charging system might burst out again,” said Sung Hyo-kyung at Korea Electric Power Corporation.
Since the bills for this month are scheduled to be delivered around mid-September, when the Chuseok holiday arrives, next month could be tough on household budgets.

Moreover, the government raised charges for household electricity by 2.7 percent from Aug. 6 in order to curb rising demand.

The country’s electricity reserves coincidentally plunged to 2 million kilowatt-hours that day, causing the government to issue a watch warning for the first time since a blackout Sept. 15 last year. At the time, Knowledge Economy Minister Hong Suk-woo blamed the London Olympics for the unusual spike in power demand because people were staying up to watch them with their air-conditioners on.

Seoul suffered “tropical nights” for 14 consecutive days from July 27 through Aug. 9, the longest stretch ever. Tropical nights are when the temperature stays above 25 degrees Celsius (77 Fahrenheit) from 6 p.m. to 9 a.m.