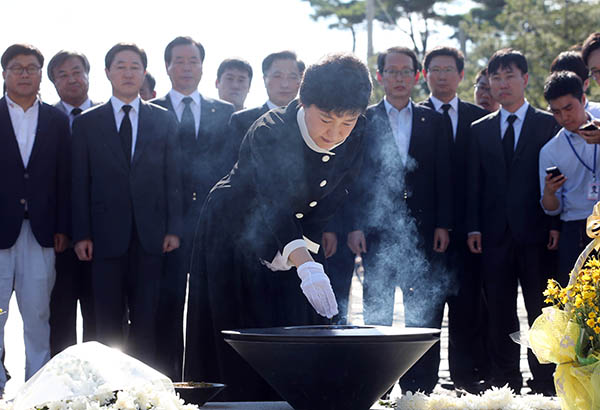 Park Geun-hye, presidential candidate of the ruling Saenuri Party, burns incense at the grave of former President Roh Moo-hyun yesterday at Bongha Village in Gimhae, South Gyeongsang, in a symbolic move to show she will work for national unity. She also paid her respects before the graves of former presidents Syngman Rhee, her father Park Chung Hee and Kim Dae-jung yesterday at the National Cemetery in Dongjak-dong, southern Seoul. [YONHAP]


Park Geun-hye, presidential candidate for the conservative ruling party, paid her respects before the grave of liberal icon former President Roh Moo-hyun yesterday in a symbolic move to show she will work for national unity.

After Park’s plan to visit Bongha was made public earlier in the morning, protesters as well as her supporters gathered near Roh’s grave, but no commotion was reported as she visited. According to her spokesman, Representative Lee Sang-il, the visit was intended to show Park’s determination to unite the nation’s conservatives and liberals and bridge the ideological divide that has defined Korean politics for decades.

It was the first time Park visited the hometown of the former president. Following a corruption investigation, Roh killed himself on May 23, 2009, and Park visited the village the next day but failed to join the memorial service as Roh loyalists fiercely protested her participation. Roh loyalists believe the corruption investigation was political persecution by the conservatives.

In the past, Park has been on the opposite end of the political spectrum from Roh. In September 2005, Roh and Park, who was then head of the opposition Grand National Party, had a summit at the Blue House to discuss national affairs. Roh made a proposal to form a grand coalition between the ruling and opposition parties, but Park flatly rejected his idea.

Her criticism of Roh peaked in January 2007 when he proposed revising the Constitution to adopt a four-year presidency without a single-term limit. At the time, Park said, “What a bad president he is. It is unfortunate for the people.”

After paying her respects at Roh’s grave, Park sat down with Kwon for about 20 minutes in a meeting joined by their close aides. Lee described the meeting as amicable.

“Because my parents died suddenly, I was terribly shocked and had a hard time,” Park was quoted as telling Kwon. “I understand how you would feel. When [my parents died], the people were my strength. I believe they will be the strength for you, too.”

Both Park’s father, former president Park Chung Hee, and her mother were assassinated in the 1970s.

According to Lee, Kwon expressed her appreciation for Park’s visit so shortly after her presidential primary victory. After Park told Kwon about her dream of “creating a country where everyone is happy,” Kwon told her that she understands how hard the job of a president is and wished Park would stay healthy.

Earlier yesterday morning, Park began her first day as a presidential candidate with a visit to the National Cemetery. Accompanied by lawmakers and officials of the Saenuri Party, Park first paid respects at the Memorial Tower, which enshrines memorial tablets and remains of soldiers who died during the Korean War.

“I will uphold the noble will of the fallen patriots,” Park wrote in the visitor’s log. “I will open a new era of grand national unity.”

She also paid respect before the graves of former presidents Syngman Rhee, her father Park Chung Hee and Kim Dae-jung. She then announced she would visit Bongha Village later in the afternoon. “Roh is a former president who also was a part of the nation’s pivotal moments,” Park said. “So I plan to visit the grave.”

“Roh died because of the Lee Myung-bak administration and its political persecution,” said DUP spokesman, Representative Jung Sung-ho. “As the presidential candidate of the ruling party, her insincere gesture is nothing more than a show to earn votes and an insult to Roh’s family.”

A key Roh loyalist, however, welcomed Park’s move. “I think it is desirable for her to do so,” said Moon Jae-in, former chief of staff in the Roh Blue House and the DUP’s presidential front-runner.

“But, I hope her visit is not just a formality,” he said. “I hope she can show the sincerity to heal the wounds of the past and seek reconciliation of the public.”

While congratulating Park for her primary victory, Moon criticized her overwhelming margin of victory, saying it showed a lack of democracy in the Saenuri Party.