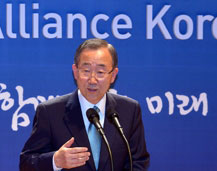 WASHINGTON - United Nations Secretary General Ban Ki-moon will be reunited with dozens of old friends whom he met five decades ago under a program sponsored by the American Red Cross, officials here said Monday.

In August 1962, Ban, as a Korean teenager, arrived in the U.S. along with 41 students from 25 nations to join the Visit of International Students to America (Vista) program.

Ban was selected for his U.S. trip after scoring top points on a nationwide English-writing exam.

He had a chance to meet U.S. President John F. Kennedy in Washington and it reportedly inspired him to become a diplomat.

“Secretary General Ban has invited some of the other participants in the Vista program at that time to Washington and New York,” a Korean embassy official said.

Ban plans to meet 53 co-participants and their families on Sunday at the headquarters of the American Red Cross in Washington, followed by joint tours of the White House and the Goddard Space Flight Center in Maryland, which they visited together 50 years ago, she added.

They will head to New York on Monday for a tour of UN headquarters and discussions about the role of the global organization, she said.

Ban, formerly a Korean foreign minister, became the head of the UN in 2007 and he is now in his second term.
Yonhap