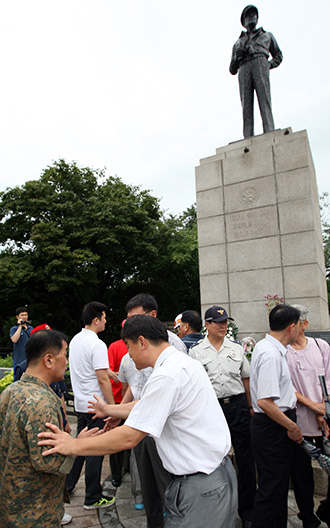 Police yesterday try to separate conservative group members from left-wing civic group members led by the Korea Confederation Unification Promotion Council who declared that they will stage a long-term protest calling for the removal of a statue of U.S. Gen. Douglas MacArthur from a park in Jung District, Incheon, until Sept. 8. [YONHAP]

INCHEON - Left-wing civic groups led by the Korea Confederation Unification Promotion Council declared that they will stage a long-term protest calling for the removal of a statue of U.S. Gen. Douglas MacArthur from a park in Jung District, Incheon, until Sept. 8.

It is the first protest by the aggressive left-wing group since Sept. 11, 2005, which turned violent when 4,000 protesters clashed with police.

In 2005, signs provided by the civic groups were quite moderate as they mostly called for simple removal, but signs this time were more aggressive, some even saying “Let’s smash and knock it to the ground!”

In memory of his Sept. 15, 1950 amphibious invasion at Incheon, which turned the tide of the war, the statue was erected at Incheon Freedom Park in 1957 using donations collected by Incheon citizens voluntarily. However, the statue has been the target of anti-U.S. demonstrations for the past decade.

Around 2 p.m., dozens of left-wing civic group members appeared at the main gate of the park and began marching toward the statue. However, about 50 conservative group members, including soldiers who participated in the 1950-53 Korean War and some retired Marines, blocked their way.

The first clash broke out when some left-wing group members tried to climb on the statue.

“Some commies are trying to spray red paint on the statue!” said a conservative group member, and a dozen veteran soldiers, blocking the protesters from approaching the statue at the gate, stormed toward it.

Harsh words were exchanged between them and some excited people tussled. After about 150 dispatched riot police divided the groups in two, a press conference was held by the left-wing groups.

“We must develop a new world after we remove the symbol of invasion and massacre,” Kim Soo-nam, a protest leader, said at the press conference. “We learned that the general is a person who we should thank for his contribution in the Korean War, but we must reconsider if he really is a person who deserves acclamation with a statue. We should remember that he is the one who ordered the killing of innocent people living in Incheon when Operation Chromite was in action.”

They also distributed printed materials which included false information to people who witnessed the protest. One of the pamphlets read “The first thing that Gen. MacArthur did after he stepped onto Incheon was shoot a gun into the crowd who welcomed him.” It also gave notice that it will stage a large-scale rally with all left-wing civic groups supporting the removal of the statue on Sept. 8, the last day of the protest.

“About seven to eight more groups will join us,” said Kim, from the protesting group.

The protest, however, was not welcomed by Incheon citizens. “Aren’t you from North Korea?” a 55-year-old citizen surnamed Kim yelled at protesters. “What do you want? You want to erect a statue of Kim Il Sung?”

“Where were you when I tried to save my hometown by joining the war when I was 17?” a 79-year-old resident surnamed Shin asked. “If you have too much time to kill, go back to your home town and farm for the North Koreans suffering from starvation.”