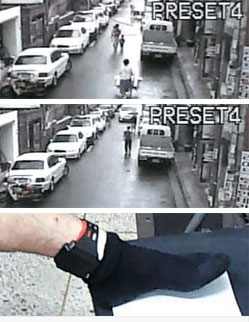 A 41-year-old ex-convict convicted of at least three sex crimes fatally stabbed a woman in eastern Seoul Monday after failing to rape her in her own house, according to police.

The alleged killer prepared the attack carefully and chose a victim who lived a kilometer (0.6 miles) from his own residence in Gwangjin District, eastern Seoul, police said.

The fact that he was a repeat sexual offender and was wearing an electronic tracking device on his ankle did not deter him, raising questions of Korea’s handling of released sex offenders.

According to the police, the suspect, surnamed Seo, was jailed for seven and a half years for raping a woman in her 20s in 2004 and was released last November. The police said Seo has been convicted of 12 crimes, including three sex offenses and also robbery and theft.

At about 9:20 a.m. on Monday, Seo was prowling his own neighborhood of Junggok-dong, Gwangjin District, eastern Seoul, around one kilometer away from his own residence, according to police.

He spotted a woman leaving an apartment building to bring two children to preschool. Seo entered the building and found the woman’s apartment open. He hid himself behind the door of the master bedroom, police said.

When the woman returned, Seo allegedly attempted to rape her. The woman, surnamed Lee, 36, fought back and tried to escape the apartment. When she almost reached the door, Seo allegedly stabbed her in the neck.

A neighbor heard the scuffle and called police, who discovered Seo in the apartment. Lee was sent to a hospital but died.

The police said the suspect thoroughly prepared for an attack, bringing a knife, a face mask and duct tape, and was prowling the streets for a victim.

There were three repeat offenses by anklet-wearing ex-convicts in 2010, but that number jumped to 15 in 2011 and was 10 this year as of August.

“It still is the most efficient and strong system for monitoring ex-convicts,” said Hwang Jin-gyu, a spokesman from the Ministry of Justice.

The police, however, said the government needs to increase the number of officers who monitor ex-convicts wearing anklets. The police said 1,030 ex-sex offenders are wearing anklets but there are only 76 officers watching them. Officers are dispatched when signals show the anklets have been disconnected or damaged.

“The ministry is also trying to improve the battery performance of anklets and also to increase the manpower relevant to the watchdog system,” said Lee Cheol-hee, a spokesman of the Ministry of Justice told the JoongAng Ilbo.

But in the case on Monday, no monitoring would have shown that the suspect was planning a new attack.

“The anklets can’t be an ultimate solution,” said Gwak Dae-gyeong, a police administration professor from Dongguk University said. “The government should start programs through which ex-convicts can manage their sexual desires.”