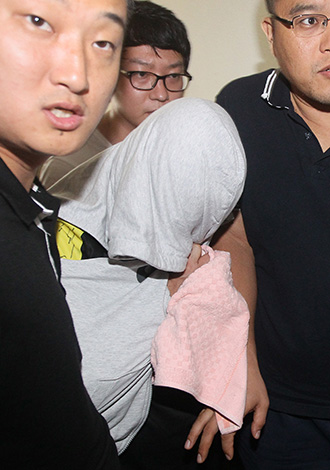 Policemen in Suwon, Gyeonggi, escort a man who stabbed a civilian to death and wounded four others. [NEWSIS]

A man who was discharged from prison last month after serving a seven-year-term for rape was arrested again yesterday for killing one civilian and wounding four others after a failed rape attempt.

After Yoo, the bar owner, put up a fight, Kang stabbed her with a 23-centimeter (9-inch) knife and tried fleeing the scene. The suspect then ran into Im, a customer entering the bar, and stabbed him in the midsection.

Police said the suspect bought the knife at a nearby grocery store before entering the bar. Yoo called the police at 12:58 a.m. and it took three minutes for a police patrol vehicle to arrive at the bar at 1:01 a.m.

After leaving the two wounded in the bar, the suspect then ran about 500 meters (546 yards) and discovered a two-story house with the front gate open, about five minutes after he fled the bar.

The suspect came inside the house and stabbed a 65-year-old man, identified as Ko, who was sleeping in the living room. The suspect also attacked Ko’s wife and son with the knife.

Police were notified of the second attack by the son and apprehended the sex offender near the victim’s house on a street at around 1:10 a.m.

Ko, wounded severely in the stomach, died of excessive blood loss while being transported to a nearby hospital. Im, who was stabbed in the ribs, received emergency surgery and is now in recovery, the police said.

Police said the suspect has 11 criminal offenses on his record and was released from jail last month following his seven-year stint behind bars.

“He didn’t show any sign of remorse or regret when told one of the victims died,” said a police officer. “He even demanded a few hours of sleep and a meal when he was taken in.”

The police will seek an arrest against the suspect once sufficient questioning is carried out.