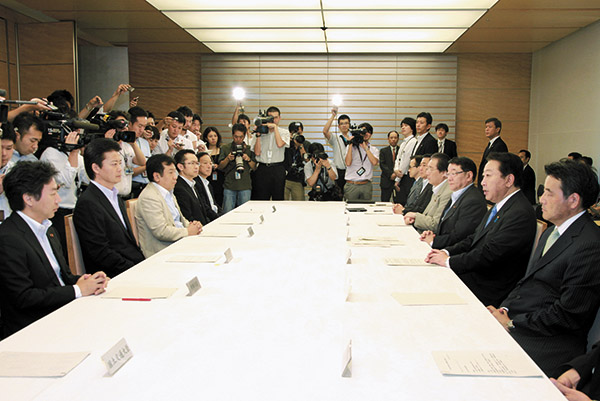 
Tokyo formally asked Seoul to take the issue of Dokdo to an international court, despite Korea’s rejection of the notion.

And Japanese Prime Minister Yoshihiko Noda convened a cabinet meeting yesterday to discuss Dokdo, which Japan calls Takeshima, a group of islets in the waters between the two countries.

A councilor from the Japanese Embassy in Seoul delivered a written proposal to the manager of the Ministry of Foreign Affairs and Trade, according to the Korean ministry, saying the disputed islets should be brought up at the International Court of Justice.

In Tokyo, Noda said, “We demand Korea mull over the matter considering the future of the Korea-Japan diplomatic relationship,” Kyodo News reported yesterday.

As for President Lee Myung-bak’s visit to Dokdo last week, Noda said he was “really sorry” and that he “needs to respond in a flexible manner.”

The Yomiuri Shimbun reported yesterday that Noda asked Lee to refrain from further provocative acts, such as another visit to Dokdo, in the letter delivered yesterday.

“We feel really sorry about the Japanese government’s unjust claim of sovereignty over our territory,” Foreign Ministry spokesman Cho Tai-young said at a regular briefing yesterday.

“We once again strongly urge them to immediately stop these groundless, unjustified claims. Dokdo is a definite territory of Korea based on history, geography and international law, and a territorial dispute can’t exist. It’s not worth thinking about taking the issue to the ICJ.”

When it comes to speculation that Tokyo is pondering various economic measures to pressure Seoul to agree to the proposal, such as reducing Korea-Japan currency swaps or suspending purchases of Korean government bonds, Tadahiro Matsushita, Japan’s senior vice minister of economy, trade and industry, told reporters yesterday that both countries should be careful with the matter.

“Both countries should judge [the situation] calmly,” he said at a press meeting. He said that the emergency currency swap deal between the two countries is “a policy that exists because it’s necessary.”

On Friday, Japanese Finance Minister Jun Azumi told reporters that he was “considering” whether to extend the current swap treaty that expires at the end of October.

In an effort to emphasize Korea’s ownership of the easternmost islets, the Ulleung County Office yesterday decided to name all of the unnamed rocks or peaks in Dokdo, located nearby Ulleung Island. The office will also rename those with military names, such as “Tank Rock.”

Choe Su-il, head of the county office, said, “It will become an opportunity to proclaim that Dokdo is our territory through renaming all geographic places in Dokdo.”